This weekend was crazy busy, crazy fun, and crazy me didn’t get nearly as much as I wanted done. Eh. That’s what Monday’s for, right? Catching up on stuff you ignored over the weekend. Or waiting till next weekend.

(And the cycle continues.)

(Chris knows what I’m talking about.)

On this weekend’s schedule:
1) Friday night we had Sonia, Paul, and Jeremy over for a Wii Sports Resort night. I fed everyone homemade artichoke chip and felt very hostess-y, we drank raspberry iced tea, and we cheered on the boys as they valiantly fought the ninjas through all ten levels. Ninjas grew boring after awhile, and Sonia and I retired to the back of the house for girl talk. Paul found us at 12:30 lounging on the big bed, talking about life and babies. (Cuz that’s what you talk about when you’re a married female.)

2) Saturday, the coldest day I’ve ever experienced let-me-tell-you, we went to see a preview showing of Little Miss Sunshine at the La Jolla Playhouse. It was pay-what-you-can day and we paid $5 for what would have been $68 tickets. Ry and I were pretty excited about the cast: all Broadway veterans (even the little girl playing Olive), including Jennifer Laura Thompson, who played the role of Glinda in Wicked after Kristen Chenoweth left the show; Hunter Foster, Sutton Foster’s brother (Sutton Foster is my favorite Broadway actress- she’s freaking amazing), and Taylor Trensch, who we saw playing Blake Bashoff’s replacement as Moritz on the Spring Awakening tour.

Sadly, the show was terrible. Not for the fault of the actors, who were great- especially the girl playing Olive. The show just really was nothing special. We discussed in detail during intermission and after the show, over dinner at Rock Bottom. Consensus: no memorable songs. Not a one. Very little choreography/dancing. It felt like a play with songs sung at each other. Granted, the show’s only in previews right now; official opening night is this week, so they’re tweaking and changing everyday, but I don’t see them making this show spectacular with what they’ve got.

We also went on a cupcake adventure after Rock Bottom. Ended up at Babycakes. Good cupcakes.

3) Sunday, today, Chris and I ran errands and got a shelf for our garage. We are wild. I prepared a Geometry test for my kids tomorrow, and he organized the garage (as well as put up our new shelf). My sister came over for dinner and to get help installing Office 2010. Which I graciously helped her with, for the small price of one of her three activation keys. Office 2010 rocks, and now it’s mine! All mine!

And now it’s midnight. Chris is in the office, shooting bad guys and downloading his iphone pictures, and I’m here being enamored with youtube videos of my favorite musicals that I stumbled across while looking up the previous links. I love musicals.


(Although the yellow van parked outside the theater was cool. Props for that.) 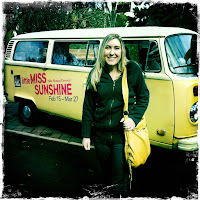 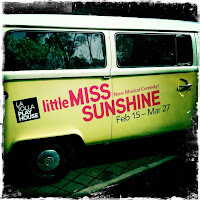