Shrimp with Quinoa and Spinach

Lincoln has had an amazing food day today. And by that, I mean he has probably had the most healthy eating day he’s ever had in his little life (breastfeeding days excluded, of course). It’s been so exciting seeing him eat AND enjoy so much good-for-him food!

For breakfast we had green smoothies chock full of veggies and fruits and other nutrient-filled stuff (oatmeal, flax, chia seeds, almonds, and kefir, to name a few). He drank a full-sized adult amount! 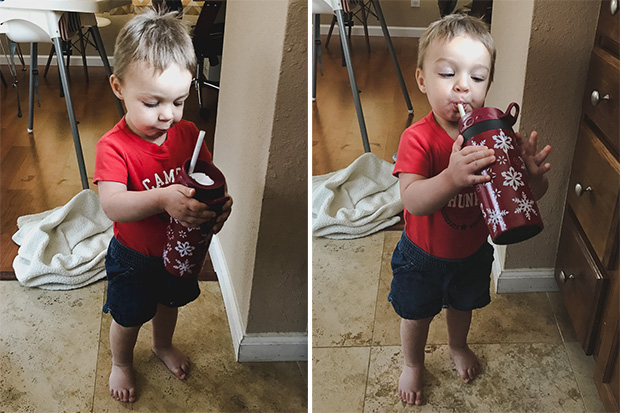 For a snack he had these banana bread bites we got in our first Thrive order. I’d totally forgotten about them until I went rummaging for some snacks to throw into the diaper bag for our park play date today. Also threw these rice cakes from Thrive in the bag, which Lincoln loves.

The least healthy part of his meals today came at lunch. Apparently today was national grilled cheese sandwich day? Weirdly, I had already planned to ask Chris to make us his famous grilled cheese sandwiches for lunch, so when my friend Sonia told me about this “national” holiday, I knew it was meant to be. And yes, Lincoln, LOVED the sandwich. And I can’t even really say it was that unhealthy, considering we used Dave’s Killer Bread, cheddar cheese, and organic butter to make it.

Oops, I did forget that he macked down on a baggy of puffs he found in his diaper bag. Still not sure if those fall on the healthy or unhealthy side of things. Supposedly they have vegetables in them?

But dinner. Oh man, dinner. I knew I was going to cook him up some shrimp. We always have a Costco bag of frozen shrimp ready to go in the freezer so it’s a really quick and easy meal to make with rice for Lincoln. I randomly got some inspiration while I was defrosting the shrimp to really dress it up with some sautéed garlic and grated ginger. I recently read about freezing ginger in order to always have some on hand, and that was an amazing tip. Ginger grates from frozen so easily! Then one thing led to another, and I was finely chopping a handful of spinach to toss in and pulling out the container of cooked quinoa I had made ready a few nights ago. And suddenly it was this amazing meal! Best of all, Lincoln ate it! I was a little worried toward the end that I had gotten a little out of hand for a toddler meal, but he kept coming back for more, so hurray!

Side note: At this point Lincoln also drank all of the remaining green smoothie that Chris didn’t want from this morning–a whole new adult sized green smoothie! (Chris didn’t like the smoothie I made and left it in the fridge. Seriously, this kid was crazy today.)

While Chris put Lincoln to bed, I made a bigger batch for us to have for dinner, too. It passed even Chris’ high standards for dinner, so I’m thinking it’s a winner and definitely something that will go on our rotating list of meals. And bonus, I now have a go-to quinoa dish that we all like. 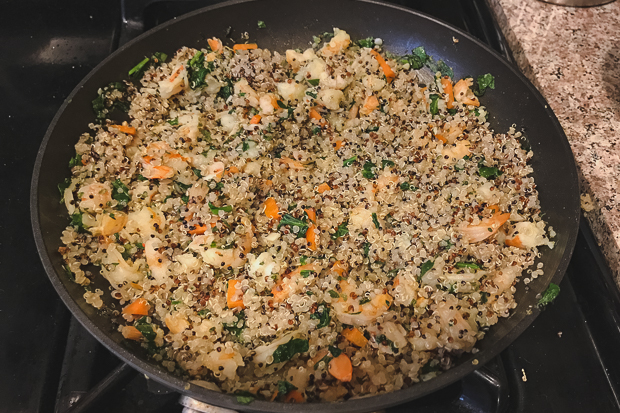 Mmmmm… kind of looks like shrimp fried rice in this picture.

This is one of those meals that can be done in a variety of ways. This is how I did it tonight: