Reminders of our first home.

Lots of stuff going on right now, but I don’t really feel like venting it all. Maybe later.

The gist:
Chris and I are shooting his cousin Lexi’s wedding this weekend. We’ve got lenses rented, flashes ready to go, batteries charging as we speak. We’ll be driving up with his parents, his cousin Bethany (whom we used to live with), and his aunt who’s staying with his parents right now. It will be an awesomely tight fit with all of us, our luggage, and camera equipment, in one SUV. Chris actually bought a car adaptor so we can work on our laptops during the drive to Monterey. (I love that guy. He thinks like me.)

Most of my kids majorly bombed their chapter three test today. I’m a little mad at them.

Chris has been working like crazy all week long. Apparently there’s many, many projects due all of the sudden, and he’s feeling stressed to get everything done before the weekend, since he’s taking Monday and Tuesday off for us to drive home and recuperate from the craziness. I want to go love on him and squeeze him and tell him he’s so great, but he doesn’t like that when he’s stressed. (That’s where we don’t think the same.) So instead I’m giving him some space, letting him have the office to himself and working on my own stuff.

Finally, and the whole point of this post, I am grieving the fact that I don’t record as much as I feel I should be, and especially when I read other blogs and appreciate the simple day to day stuff that shows up, I feel like I just want to take my camera and go all over my house and snap pictures to remind myself of what things are like right now. So I did.

There’s no people in these pictures (except the one of Chris). These are just pictures of everyday mundane things of how our house looks. Little things like our toothbrushes, our unmade bed with the zillion unmatching blankets since our house is freezing, the plates sitting on our desk from the red velvet cake we ate last weekend for our six month anniversary. And I threw in the one of Chris, which I obviously didn’t take, but he took on that same day, because I want to prove I’m not the only one who takes pictures of herself in the bathroom mirror. 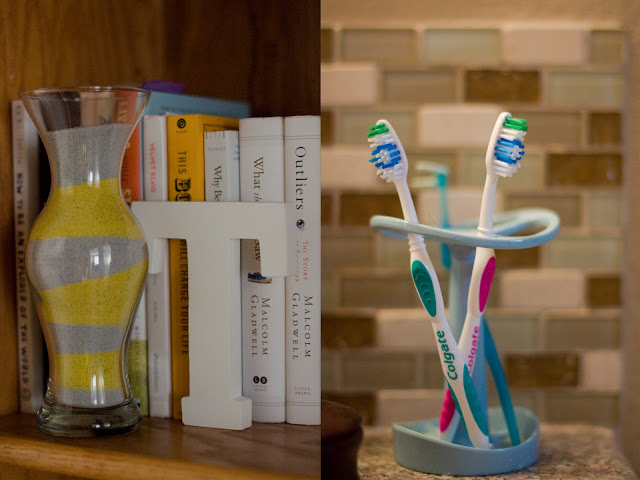 Silly to take pictures of random stuff, I know. But all that really matters is that when we’re eighty and eighty-one, living in our awesome retirement community (seriously, we keep hearing about those places and they sound amazing- can’t wait), we can remember our first house and our first year together.