In my defense, I did have a baby six and a half weeks ago, so that’s been keeping me busy. 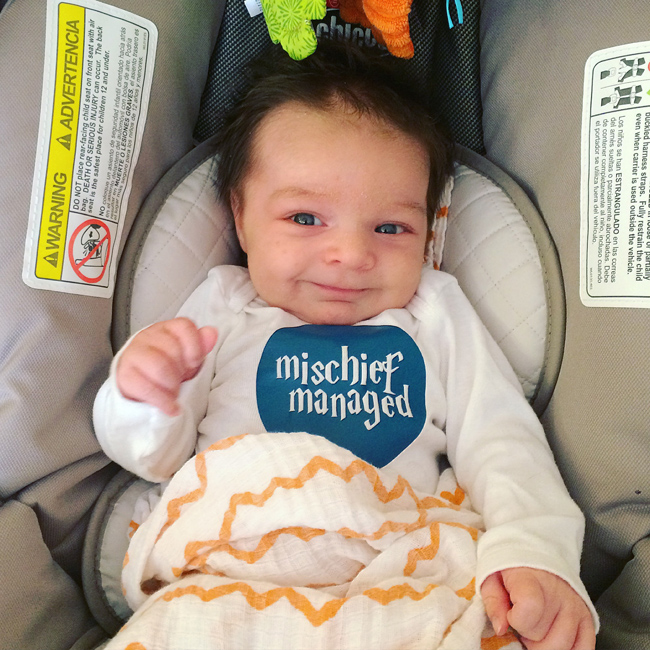 Lincoln has definitely made the last few weeks interesting. We’re finally finding somewhat of a rhythm to our lives again (and then re-finding it when Lincoln switches it up on us). Tonight we are out of our rhythm, visiting Chris’ parents in Yucaipa, because Chris had a short wedding in Palm Springs today. Link had been doing really well the last few days, going to “bed” at around seven (which we’re trying to get him in the routine of) and sleeping pretty much through the night, meaning he’d go back to sleep fairly quickly after waking up to eat. Today, however, he’s been in and out of twenty minute naps, and is refusing to fall asleep for good, despite knocking down four and a half ounces at “bedtime.” It’s now 11 pm, and he’s been dozing on each of us and suddenly waking up with a vengeance for about three hours. We think he subconsciously knows it’s New Year’s Eve and is showing his stubborn colors early by fighting sleep to make it to midnight.

So. My plan today, during what would have been his nap times, was to update the blog with all kinds of things. The last days of pregnancy, his birth, the crazy first week of parenthood, and a good ol’ reflection of the past year. But I’m calling it now. It’s fifty-five minutes to midnight and this blog post is basically just me tiredly writing sentences and trying to be coherent. I’ll continue to type until I fall asleep and we’ll just see what happens.

Last year (post here), my word for the year was TODAY. Though really it was the phrase, NO DAY BUT TODAY, a line from the last song in the musical Rent. The idea behind it was basically not letting fear of the unknown hold me back on things that I wanted to do. At the beginning of the year Chris and I had decided it was finally time to add to our little family, and though the idea of changing our lives so drastically was a little intimidating (yes, that fear was still there despite the fact that I have been in the “I want a baby” zone for about, oh, 15 years), we obviously went ahead and pulled the trigger on the baby thing. So I’d say that goal for 2015 was a success.

The other being part of TODAY was choosing health. 2015 saw a lot of green smoothies, and some new healthy recipes, but overall food-wise we didn’t do so well. Working on that more in 2016 (Hello Fresh boxes will be a big help with that). Exercise was a lot better.  I was at the gym way moreI got my FitBit in January, and up until the day Lincoln was born I wore that thing every day, except three days when I forgot it at home in the charger. My goal was set to 10,000 steps for the first 8 months or so, then I lowered it to 6,000 for the last two months of pregnancy. My school went on a big health kick this year, too, with a big FitBit step challenge, which has been awesome, but I did push it a bit too much too often. (It’s really hard to take it easy and stay off your feet when your FitBit app keeps telling you all the other people who are passing you up in steps.) When I return to work in February, I am so going to be back in the running for those weekly prizes. I put my FitBit back on today for the first time since Lincoln’s birth, and I’ve even got a set of new, variously colored wristbands to wear it in thanks to Christmas and Chris’ parents.

So what’s the word this year? I honestly have no idea. I haven’t even been able to focus enough to think of what I want next year to look like. A lot of the year is up in the air. I don’t know what it’s like to raise a baby from six weeks old to thirteen months. That’s a big span with lots of changes in the life of a baby! Seriously no idea what to expect on that front. As for teaching, half the year will be spent continuing my study hall/math resource job, but for the fall I have no idea where I’ll end up. I could go back to my 8th grade math job, I could stay where I am, or I could get moved to the high school. Really the only thing I can control in 2016 is eating better and getting more exercise.

I’ll think of the whole word thing over the next few days. We’ll see what I can come up with for 2016.