Among other things, our fridge was broken. Chris and I went down and picked out a new one from Sears Scratch and Dent over the weekend. We were super excited about our selection, which has the much coveted ice and water dispenser on the door. Yes, we are getting fancy.

So, we had them leave it in the garage and told them we aren’t any pansies around here, and we’d take care of it ourselves. And with the help of Justin, Jesse, and Ryan, we totally did. (And by we, I mean that I helped by taking pictures and offering encouragement in the form of, “Wow! Look at those awesome biceps at work!” and “Justin, you may not want to place your neck in the six inches between the corner of the 250 pound fridge and the wall.”)

Zoey was there to cheer on her dad. But she was very concerned toward the end and had to get some hugs in when he finally made it up the stairs. 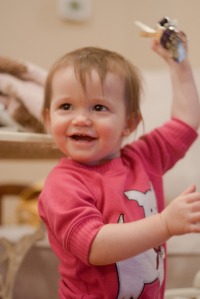