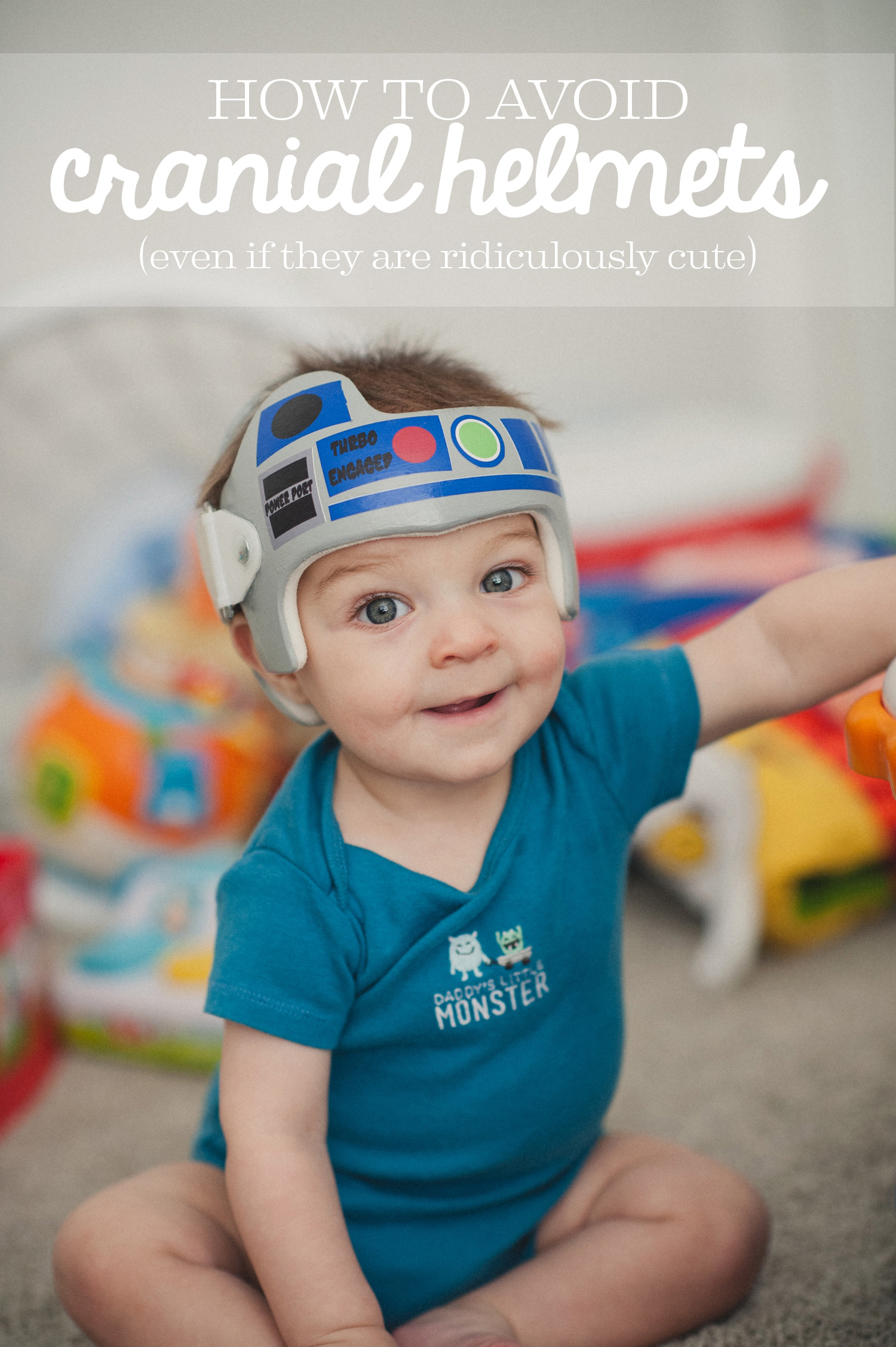 Our little monkey’s rocking some new head gear these days. Something they don’t mention at the hospital when they let you take your lovely newborn home? Watching out for signs of a flat head, aka plagiocephaly. In Lincoln’s case, if we had just been watching for the signs, we probably would’ve been able to mitigate the problem from the get-go and L wouldn’t have to wear the helmet. But we didn’t know, and so he does, and here we are, making lemonade out of lemons… or protocol droids out of cranial helmets. And I’ve made it my mission to make sure people know to be looking out for plagiocephaly (and in L’s case, the torticollis which caused it). 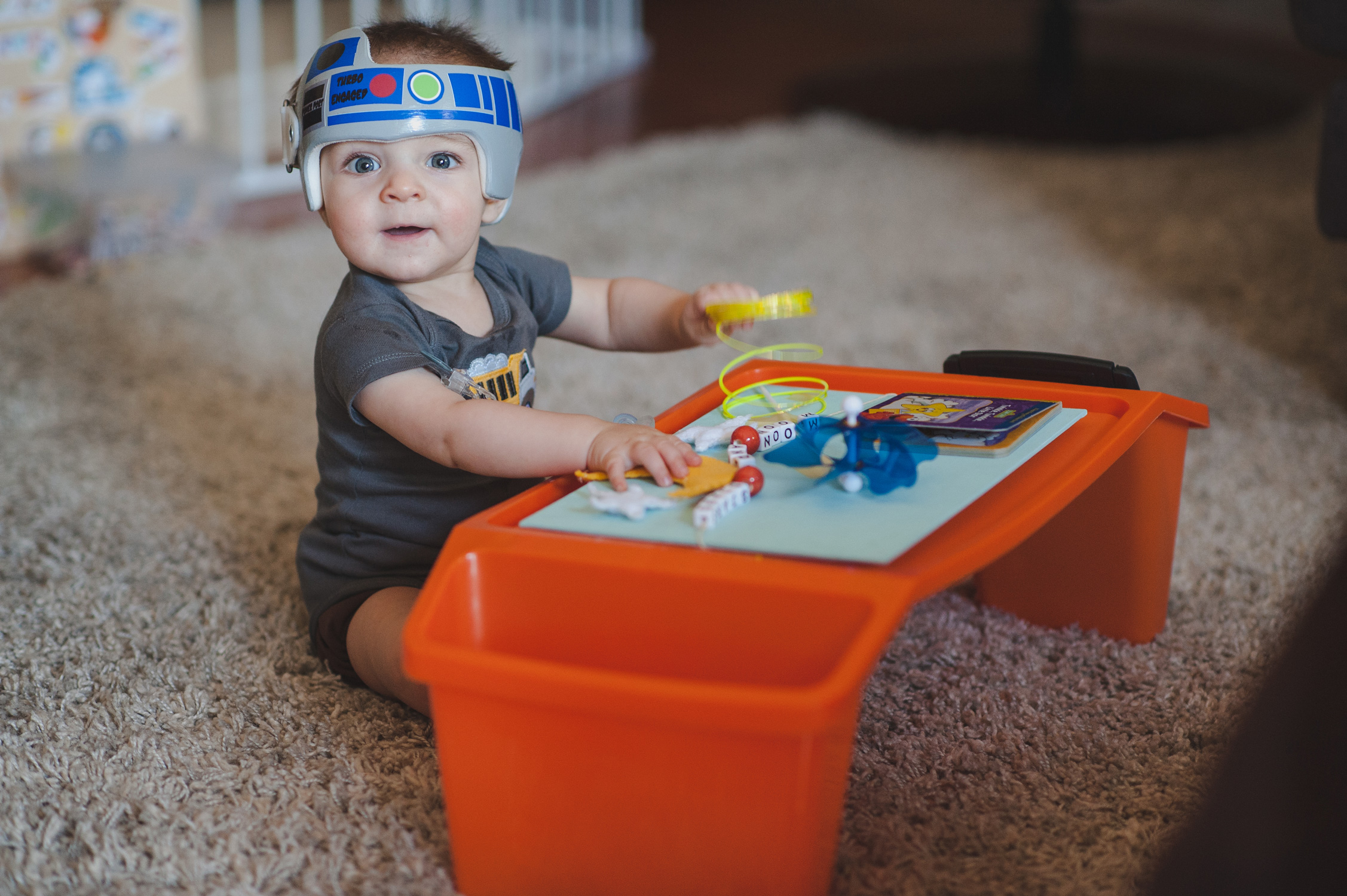 At Lincoln’s two month appointment, his pediatrician noticed he was having a hard time looking to the left (the torticollis, or tight neck), and that he was developing a flat spot on the right side of his head. This was due to him always sleeping with his head tilted to the right, something we realized after that appointment. The doc set us up with an appointment for baby physical therapy.

Lincoln loved his PT appointments. He got to play on a giant mat and flirt with this therapist while she helped him see that he could turn his head to the left if he wanted. She told us that his neck was apparently tight since birth, possibly due to being pulled out at a weird angle, so he had just learned to always look right rather than deal with pushing past the tightness on the left. But the good thing was that his neck could twist that way easily. We just had to get him doing it more often to make that tightness go away for good. 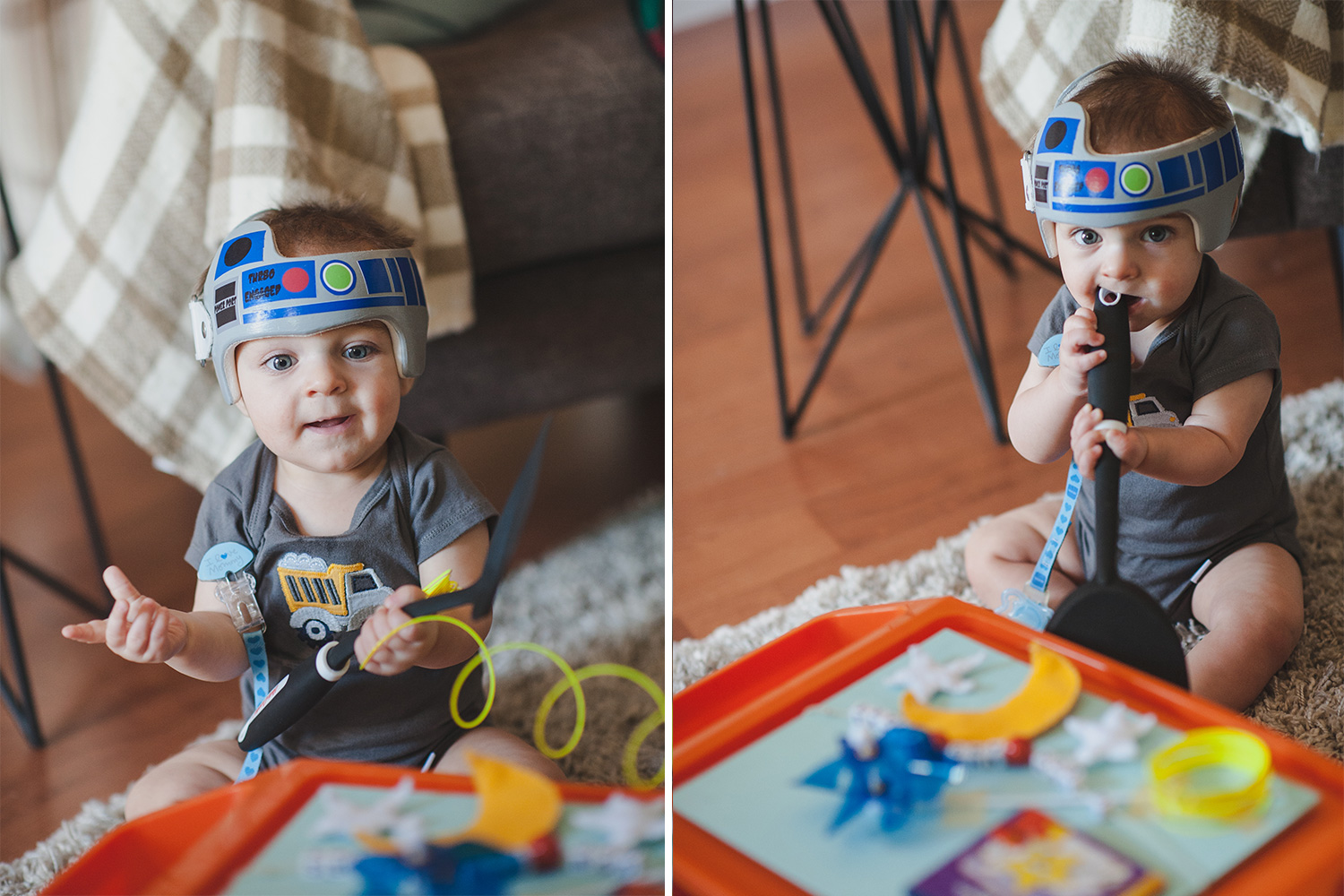 For a few months we had him sleep with “rice socks” we were instructed to make: tube socks full (and I mean full) of rice. When Lincoln slept, we swaddled him tight, laid him between the socks, and tilted his body to the left so he didn’t have the chance to keep sleeping on his flat spot. The hope was that since he was still so young it would work itself out. But Lincoln became too much of a mover at night, and soon he was busting out of the swaddle and out from between the socks, so the PT began talking helmet with us around four and a half months. At least the tightness in his neck was gone from his physical therapy! 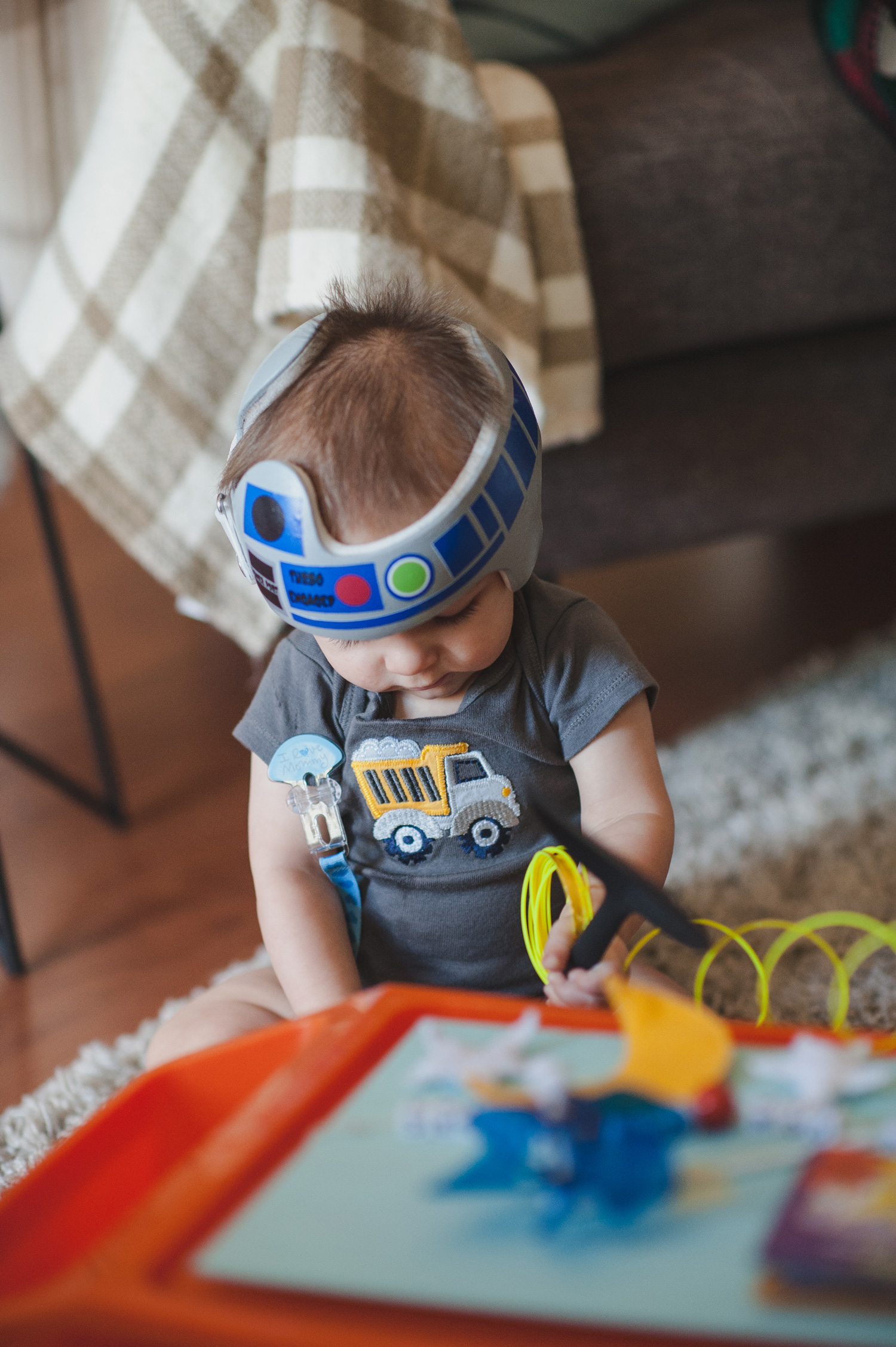 Lincoln didn’t get to start his helmet until he was about six and a half months old. (We had to do a little runaround with our insurance for quite awhile unfortunately.) Because of that, he has to wear his helmet a bit longer than was originally forecast. We were told at his last appointment that he probably has about six weeks left, so that’s exciting! That helmet may look cute, especially once it’s decorated, but it has a bunch of drawbacks. For one, that thing HURTS! Lincoln is a big mover and squirmer, and both Chris and I have been smacked in the face with the front of that helmet. It also makes cuddling really hard since we can’t feel his sweet little head against us. And second, it makes his head stink! Poor guy has had it all summer, and he wakes up in the morning with a sweaty, stinky head. He also has begun to think he’s indestructible, because that helmet absorbs the impact from any fall–he’s in for a rude awakening when that thing’s not on 23/7. 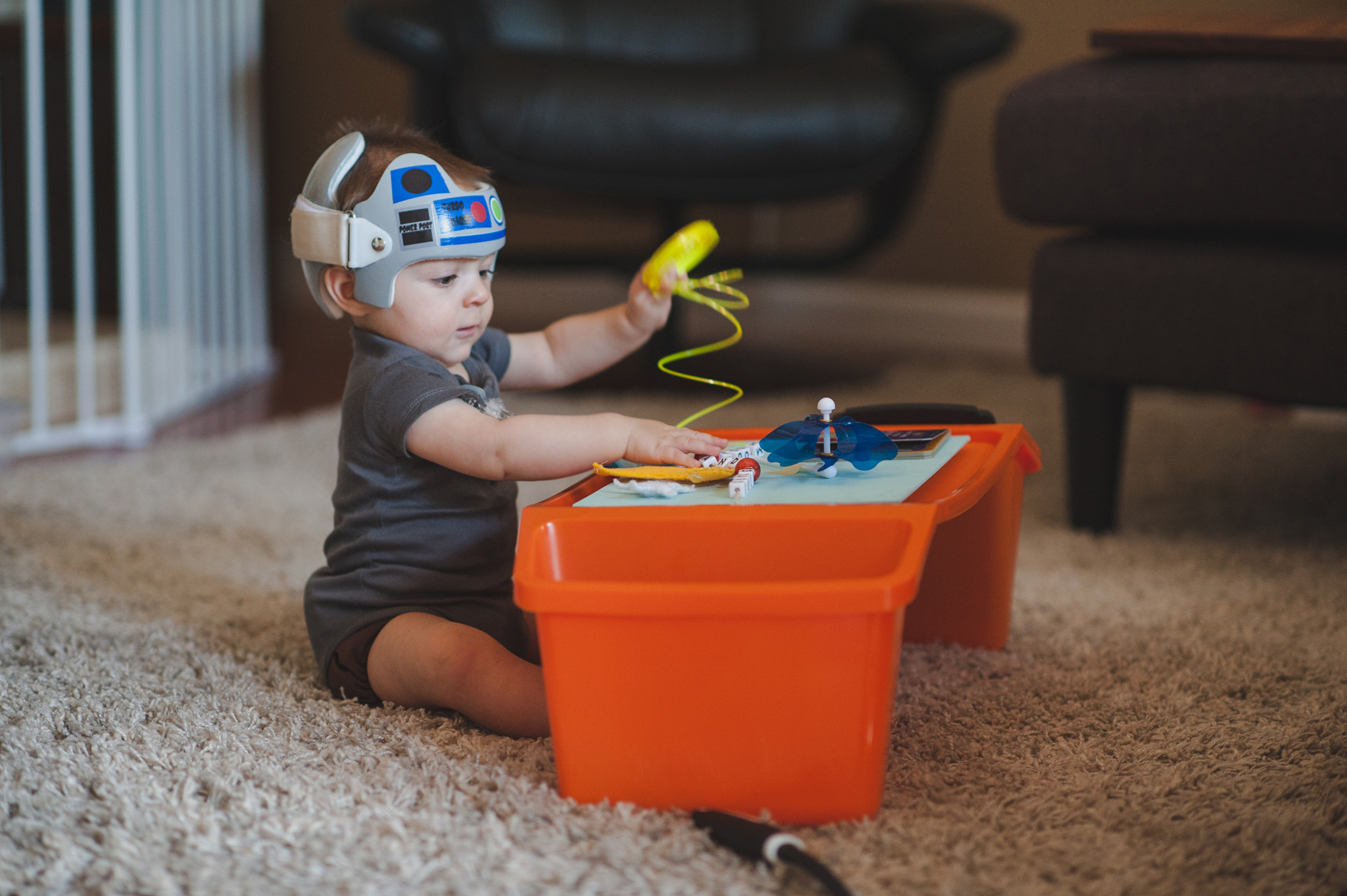 So here’s the PSA: take note of how your baby sleeps and if they can turn their head both ways! Chris and I had no idea to be looking for something like that, but we feel pretty confident that if we had noticed the neck tightness, and made sure that we placed him to sleep making sure he was alternating facing left and right, that Lincoln would not have developed that flat spot. When Baby T. #2 comes along, you can bet we’ll be super vigilant watching for the first sign. 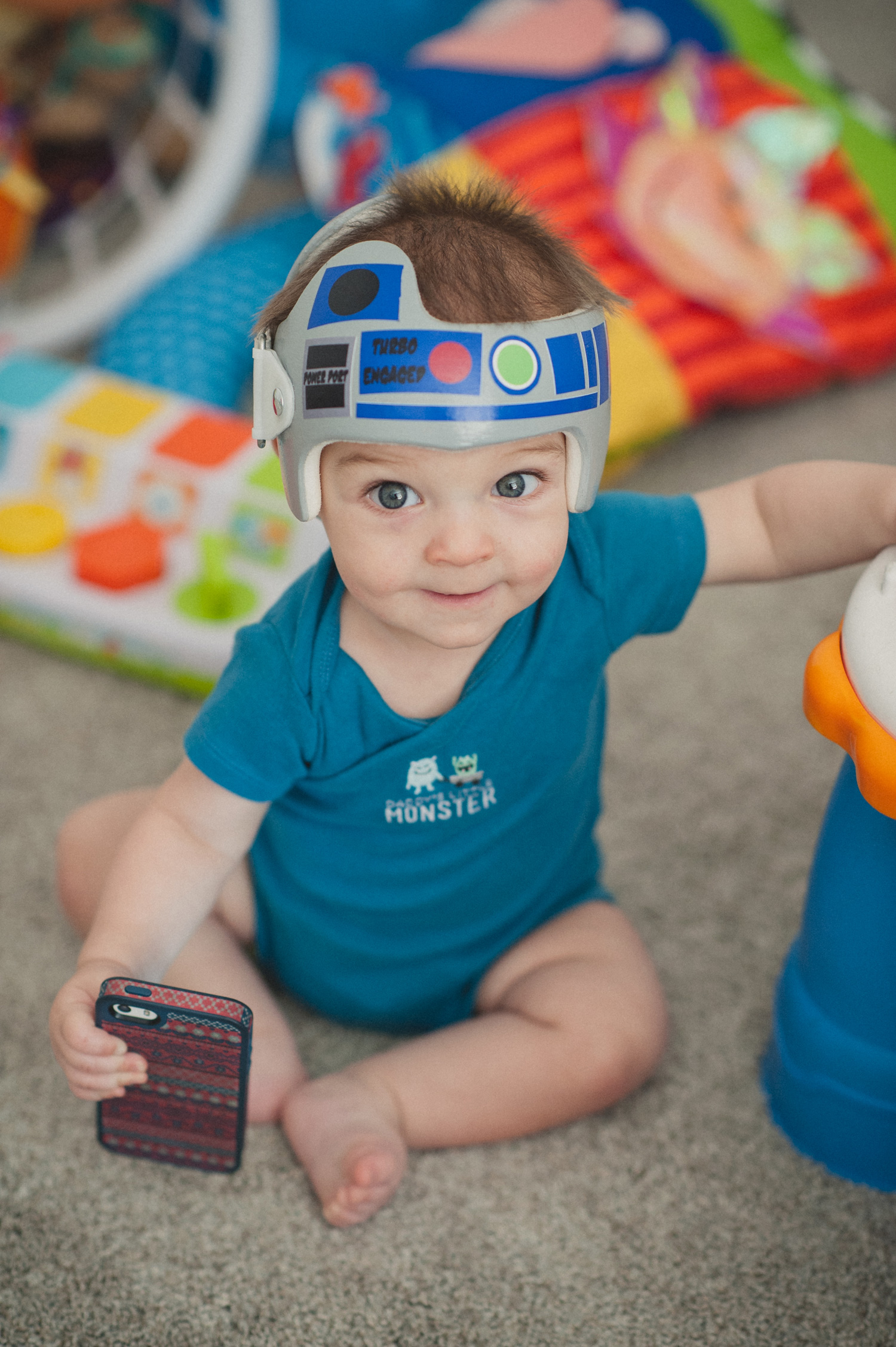