So this was quite an amazing Christmas for me; my husband’s parents got me a Silhouette Cameo! I was not expecting this, so suffice to say I could barely finish unwrapping the box when I realized what it was. I think I just laid my head on the box and cuddled it for a minute while feeling completely overwhelmed.
“Oh, yeah,” my husband says. “They told me they were getting that for you.”
“Why didn’t you stop them!? Why didn’t you tell them it was too expensive?!” This is going on full in front of everyone at Christmas, by the way.
He shrugs. “They do what they want.”
Good grief. I owe them about 5 grandchildren now.
This was the first Christmas I can recall in recent years that I’ve actually had something I’ve been itching to play with all day. As soon as presents were done, I plugged that baby in and got to work. And by getting to work, I do mean setting it up step by step, exactly as the directions indicated and reading every word of the manual. Sadly, even reading the directions insanely carefully didn’t keep me from cutting out giant notches at the top of my cutting mat right off the bat. Sigh.
I’m not going to lie; it was a bit of a struggle at first. Turns out my laptop’s CD player has decided to go on strike, so I had to download the software from the Slow Moving Internets of Oak Glen. That took awhile. But finally we were up and running, and I was figuring out how to access the library and hemming and hawing over what my first shape would be. Of course, I picked one a wee too intricate and made it a wee too small and had my settings a wee bit off, so it was crap. Then I switched to fabric, since my mother-in-law had a nice stack of scraps going, and I had to show her how I was going to make cute onesies for those five grandkids soon. (My husband is pretending he doesn’t hear this.)
I was determined to get something workable out of the day’s practice. After much trial and error, I finally got this adorable guy mostly cut. I had to trim up a couple of spots where the fabric didn’t quite part ways. Baby T #1’s (future baby, not pregnant, calm down, people) first handmade onesie will be Christmasy and it will be adorable!

My mother-in-law says, “How will you sew it on the onesie without it fraying?”
Dang it. I really have no idea what I’m doing with fabric. Of course I can’t just iron this on without it actually being an iron-on. But I’m keeping it anyway, and I’ll probably hand sew it on in some weird fashion just to use it because like I said, it was my first real cut-out with my Cameo.
Now we’re back home, and I still have one blessed week off from school, so I busted Cam out again. (Yes, I’ve given him a nickname. And yes, Cam is a him.) This time I decided to keep with my actual strengths, so out came the paper. I was really in the mood to do more than just randomly pick a couple of designs, so I decided to try my hand at my own creations. I recently downloaded the Adobe Shapes app and have been itching to get a sharpie and play with some doodling. Since I’m also trying to plan out some ideas for the start of my next Project Life album, and I wasn’t really finding a fun 2015 shape on Pinterest, I went for making my own.
I can’t believe how incredibly easy it was.
Now to be fair, I have the most updated version of Photoshop, plus a Creative Cloud account (thank you, photography business), and the Shapes app goes hand in hand with both, so I don’t know how easy this is without the Creative Cloud connection syncing shapes automatically, but I can’t imagine it’s much harder.
To make your own Photoshop shape with the Adobe Shape app:
Step 1: Draw your doodle/word/quote on a white piece of paper, using dark lead or ink. I used a thick black Sharpie. You want to use white paper, because contrast is your friend here.
Step 2: Use the Shape app to capture the image. Clean the image up using the app’s instructions and tools.
Step 3: Save the shape. If you have Creative Cloud, saving will automatically sync to your library, and you should be able to find your shape quickly when you open Photoshop. If you don’t have Creative Cloud, I think you can just save the image on your phone, get the picture to your computer with whatever way is easiest, and then open the image in Photoshop.
Step 4: In Photoshop, you may need to fill in the shape. Mine had lots of hollow spots, because the app mostly goes for the outline of the shape. I had to rasterize the shape so I could fill it in with black.
Step 5: Making a custom shape! Click on the Magic Wand tool, then click anywhere on your design. If there are multiple pieces that aren’t touching, just click on the other pieces to add them to the selection. Right click the image and select Make Work Path, and a little box will pop off with the tolerance setting. I set mine to 1, because… why not? Truth moment: I don’t really know what this does. Usually I’d ask my graphic-design-degree husband, but he’s busy playing League of Legends, so I’m on my own for this endeavor. Anyway, Photoshop will create a path around the design. Why do you need this? Honestly, because “Define Custom Shape” in the edit menu will stay grayed out until you do this part. That’s the only reason I’ve got. So now that you’ve done it, “Define Custom Shape” suddenly becomes an option, and bam! It tells you to name your shape and then you’re done! The shape gets tucked away in the custom shapes section for when you want to use it.
Note: you can also make a brush out of your design here, as well. Just choose “Define Brush Preset” from the Edit menu. It’s right above the custom shape option. I did both.
Okay! Man, all that work at the start made me hungry, so in between designing and cutting I did a sushi run for us…which also involved a stop at Costco for our holiday pictures… and a stop at Michaels to check out their vinyl products….
So this is the part where I had to do some research to figure out how to get my shape into the Silhouette Studio software. The instructions I found were to save the image as big as possible, make a jpeg, then open said jpeg in SS. I did this, and my jpeg opened up about 5 sizes bigger than the 12×12 mat. Could’ve probably gone smaller. I zoomed way out to see the whole thing, selected the Trace option, then pulled the traced shape out of the jpeg and moved it onto the image of the cutting mat. Send to Silhouette.
And look how cool it came out! Even my husband was impressed, and that takes a lot. 🙂

PS- using an xacto knife instead of buying the expensive spatula = win.
After all my not-so-good attempts from before, I wised up and cut it out first on scrap blank paper before putting in the real deal. This is my last black and white dotted card from the Midnight kit, and it is a card I love, so I couldn’t sacrifice it lightly. The trial went great, but in true Me fashion, I didn’t pay close enough attention to the cut marks on the mat when I stuck down my card. The “t” is falling off the left side. This is why it’s a terrible idea to sing along with Rent (the filmed, Broadway version) while trying to do detailed work.

I take it back. The filmed Broadway version of Rent is the best thing to watch/sing along with while crafting. It narrowly beats out the Les Mis 20th anniversary live show, but it does beat it.
Anyway, I made it work. Just tucked the word right up to the edge of the paper so it looks like it wraps around the edge. Like I intended to do it all along, right? 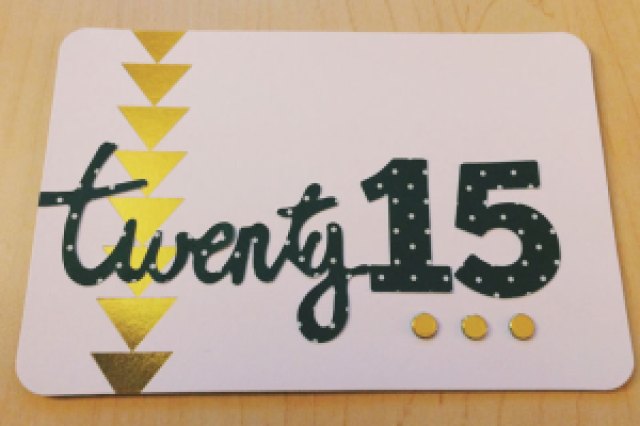 And now I have my title card for the first page of my 2015 album! (Card and gold dots are from one of the Heidi Swapp Project Life value kits I bought at Michaels.) Yes, it took extensively longer than any card normally does, but I’m so happy with all the things I learned along the way. Now I’m super confident about making my own designs in the future. Or at least, this future week. Once school starts up again I seriously doubt I’ll have too much time to do longer craft activities like this one.
Ooh, speaking of school… I was supposed to spend today lesson planning… whoops.
Anyone want the design? Like I said, I couldn’t really find any 2015 title designs when I went looking this morning, so maybe this will help someone else who’s on the same mission. 🙂 I’m putting up the links for the Photoshop brush version (an abr file) and the Silhouette design (a studio3 file) into Box for easy downloading.
twenty15 Photoshop brush
twenty15 Silhouette design
Merry Christmas! Back to inequalities and exponential functions I go!