I’ve been getting requests for my smoothie recipes on Instagram- definitely motivating me to update the daily green smoothie here on the blog. Seriously, though, I just kind of wing it depending on what’s in our fridge, what may go bad soon, or how much time I have in the morning.
This morning happens to be Saturday, so I had plenty of time to not only sleep in, but make a fully packed smoothie, too. 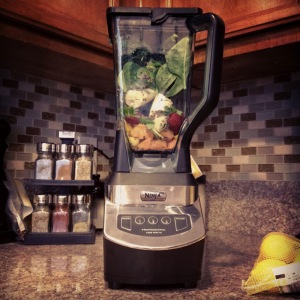 The tropical mix is all yellows and oranges, so it doesn’t hide the green coloring like the berries do, but the flavors are excellent. We’ve found that our favorite smoothies usually have the tropical fruit mix as a base. Luckily we were able to look past the green coloring early on in our green smoothie explorations. 🙂 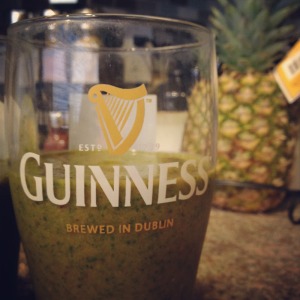 And on an unrelated note, we’re trying out a new scratcher for the cat babies. Since we got them, Sawyer refuses to scratch on anything meant for cats. He’ll only scratch on the couch, sigh. Jack, on the other hand, has scratched on every single thing we’ve gotten them, mostly because he’s ridiculously smart and knows that’s what we want him to do, so he’ll do it every time we’re looking to get some praise (and maybe a new hair tie). But he doesn’t really love any of them.

While we were morally and aesthetically opposed to getting one of the carpeted stand-up things, we’ve run out of textures and types to try. And this one was cheap. So far so good- they’ve been lounging around it since it appeared in the living room this morning, though Sawyer still hasn’t scratched on it that we can see. The thing’s filled with catnip, which they love, so we’ve got high hopes he’ll come around. (The catnip’s also why Jack is staring off into space here. He’s been lounging a little too long on the carpet…)