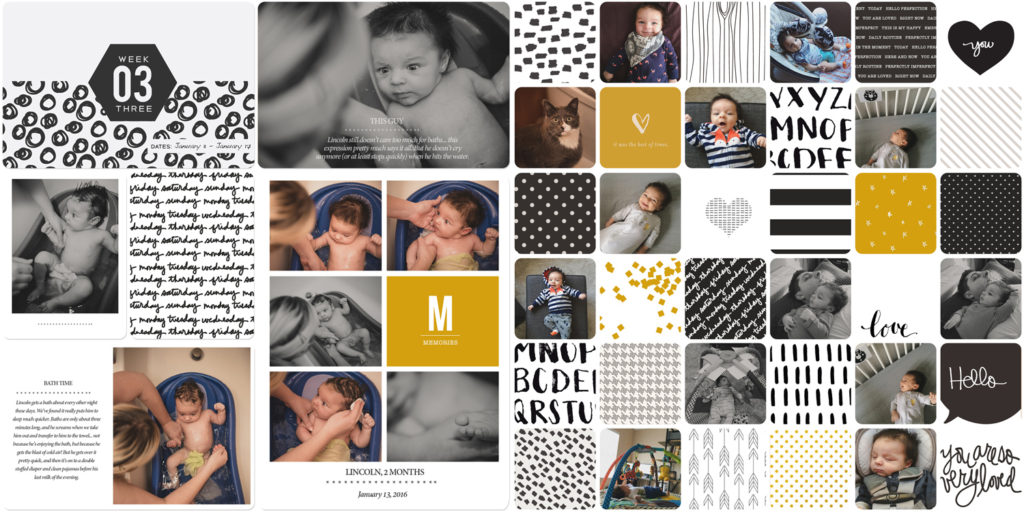 I have been so bad this last year at keeping up with our family’s Project Life. If only there were like six more hours in the day, I could get so much more done!

Also, looking at this date, how in the world did I have more time two years ago with a newborn than I do now? That is the real mystery.

This was our Project Life spread for the third week of January. I was still out on maternity leave, and Lincoln had just started sleeping in his own room. (Yeah, we switched him over at 7 weeks and all three of us were happier for it.) L’s little personality was starting to peak out, as well as his disdain for baths. Chris brought the camera in for bath time to capture some of the interesting expressions L threw out during bath time, and I’m so glad he caught some of these early, seemingly mundane moments with our little guy.

Looking back it kind of amazes me on the “bath” journey we’ve gone through with Lincoln. Here at two months, he didn’t like baths. Then around 4 months he loved them. Around 6 months he was constantly climbing out of his little tub and we had to start letting him sit in the real bath, but we were paranoid and only filled it like an inch. Then he went through a long period of bath time hatred. Like, screaming bloody murder hatred. Followed by quite a while of bath time love due to some new bath toys and books. And then around 12 months he refused to sit, so bath time was always curtailed to give him the least amount of time possible to fall on his face. Grandma got him sitting again during an overnighter, and we were good for a couple months, then boom: screaming bloody murder again. He decided that getting his hair washed was the. worst. thing. ever. For months he clung to the side of the tub with his head hanging out so we couldn’t easily rinse out his hair. (That was super fun.) And now, finally, at 27 months, we’re back to enjoying bath time again. He still whines about getting his hair washed, but he’s learned to listen when we tell him to look up so the water slides down his back and not his face.

Wow. That really was a journey. Can we be done with bath time drama now? Please?

Products in this layout: