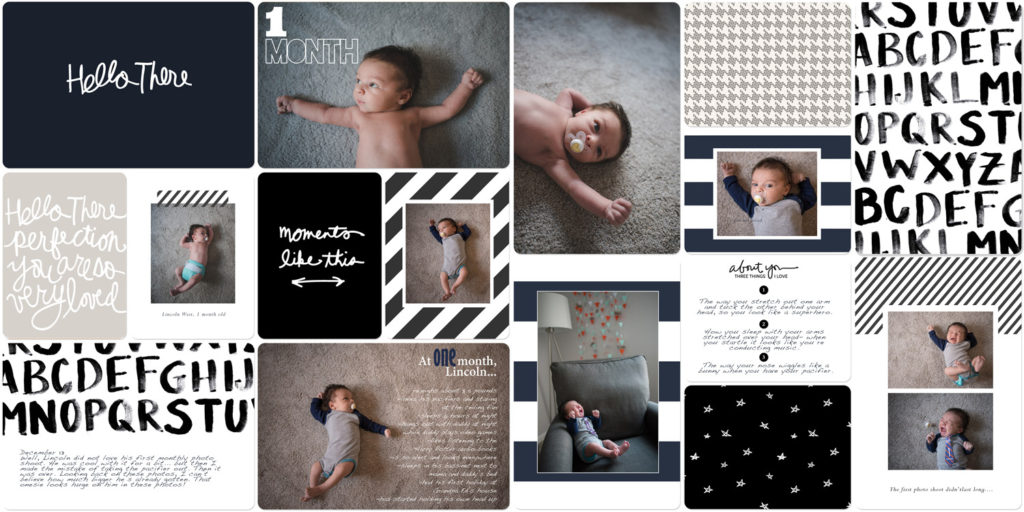 And…. it’s done! I present to you Lincoln’s (finally finished) digital baby book.

Before Lincoln was born , I scrapbooked a ton. A ton. Digital and paper scrapbooking. I’ve got bins and boxes full of scrapbooking supplies and paper. I would drive Chris crazy with my scrapping binges, with all my products and photos spread out everywhere.

This was pre-Lincoln. You know, when there was time for things.

I always thought once I had my own kid, I would be scrapbooking even more, because, hello? Constant source of material to document. When it’s just you and the hubby it’s much harder to fill out a Project Life album with day-to-day activities which tend to stay the same. I was always envious of all the scrapbookers who had kids to document. Their pages were filled with smiling babies and kids doing art projects, trips to the zoo and photos of special toys and blankets.

Not surprisingly, when Lincoln was born I found myself with a lot less time. Which means I scrapbooked even less than I had before, even with my very own “constant source of material to document.” But one thing I committed to was the monthly photo shoot. I knew that, even if I put off scrapbooking the various stories and everyday moments of newborn life, the photos were not something I could make up later. 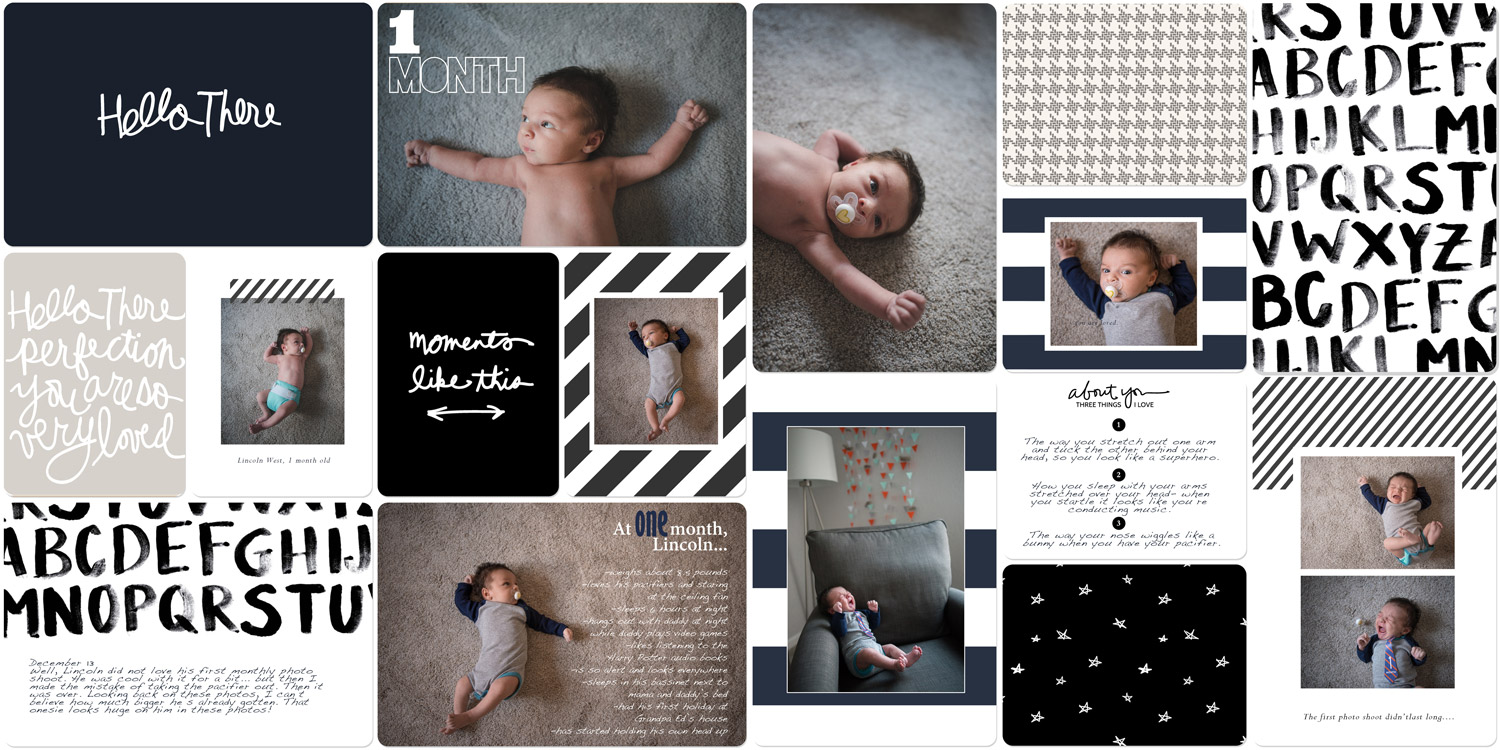 Lincoln’s one month photo shoot was a bit of a disaster. I could barely get any pictures of him without the pacifier in his mouth. I had no plan, I just moved him around from the floor to the chair, tried clothes and no clothes, pacifier in and out. He wasn’t really having it. I’m pretty sure it took the better part of the afternoon. You can see the difference in the pictures above, how the carpet keeps changing colors… that’s the light changing in the room as the sun moved over the house. Sigh.

Eventually I sat down at my computer and put a Project Life page together using the photos. Nothing was planned for the first page, but I ended up with the template which the other 11 month shoots and pages were based on by accident. When month two came along, I knew that I wanted the page to have the same elements as month one. 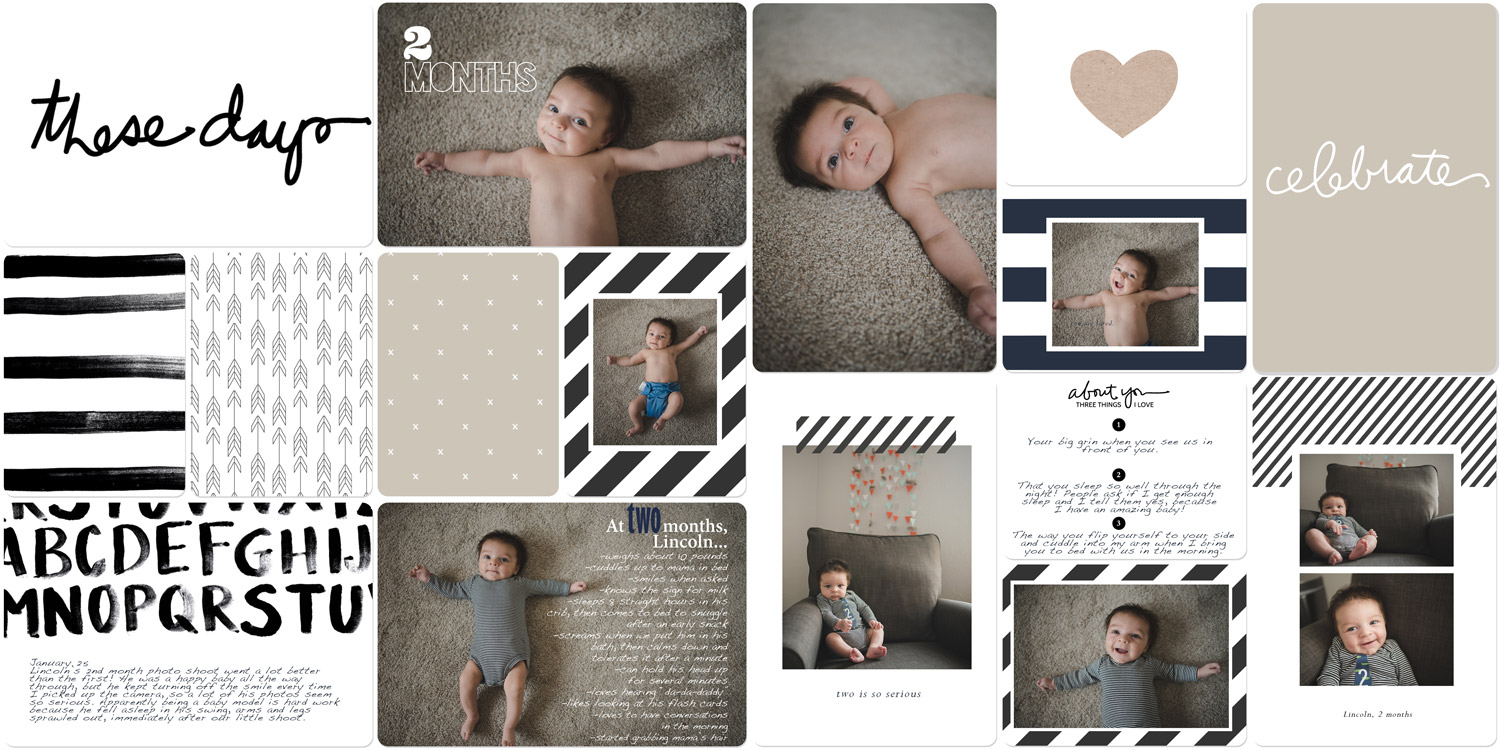 The month two photo shoot was much more deliberate. I knew I needed a diaper only picture on the carpet to overlay the month number, and another one with L in the rocking chair with his sticker tie. I also needed to frame a picture specifically with him more to the left so I could write in his latest stats on the right. And I decided at this point to keep him in a striped shirt like before. Just like page one, there was a special “About You” section that detailed three characteristics of his that I had noticed and found particularly endearing, and a short note that detailed how the photo shoot had gone. And bam. I had my plan for all the pages in his baby book. 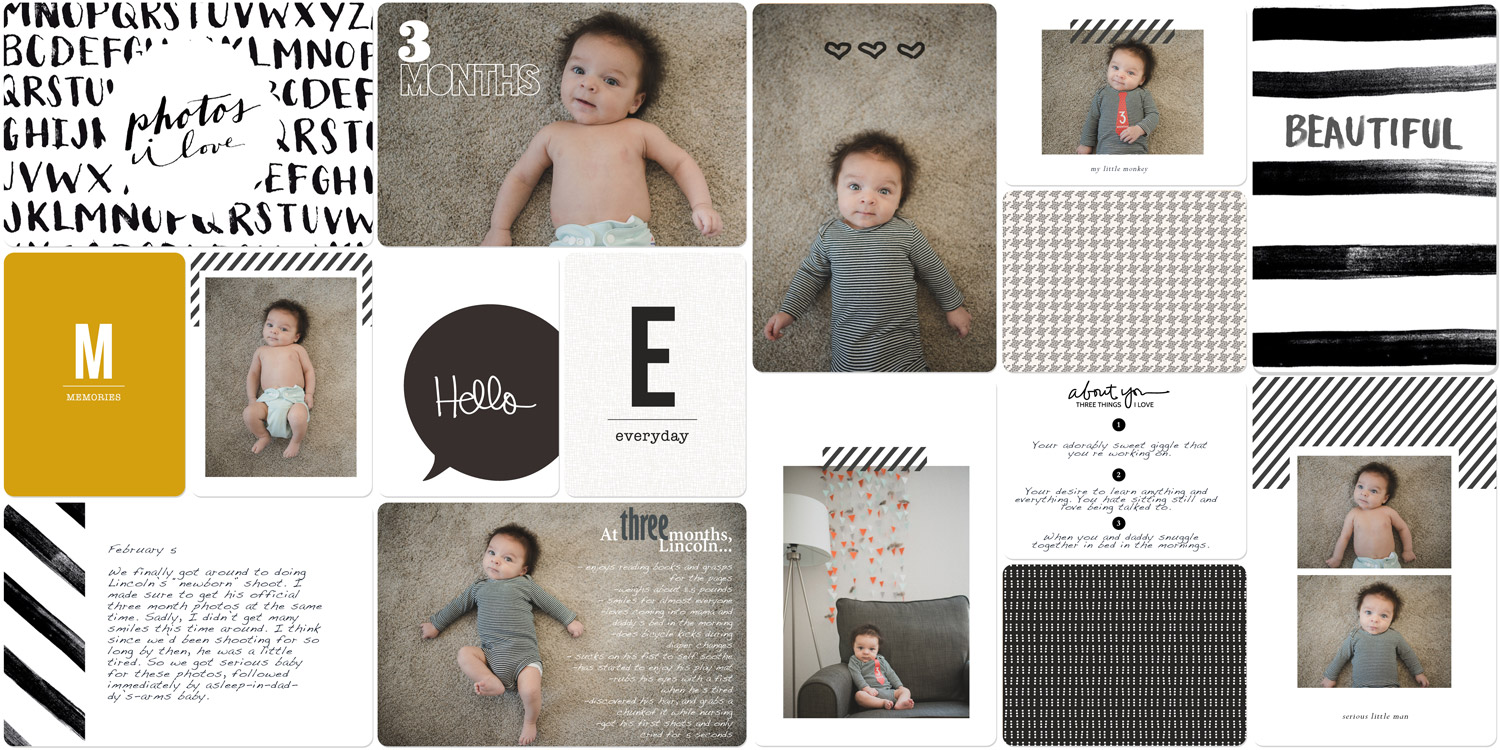 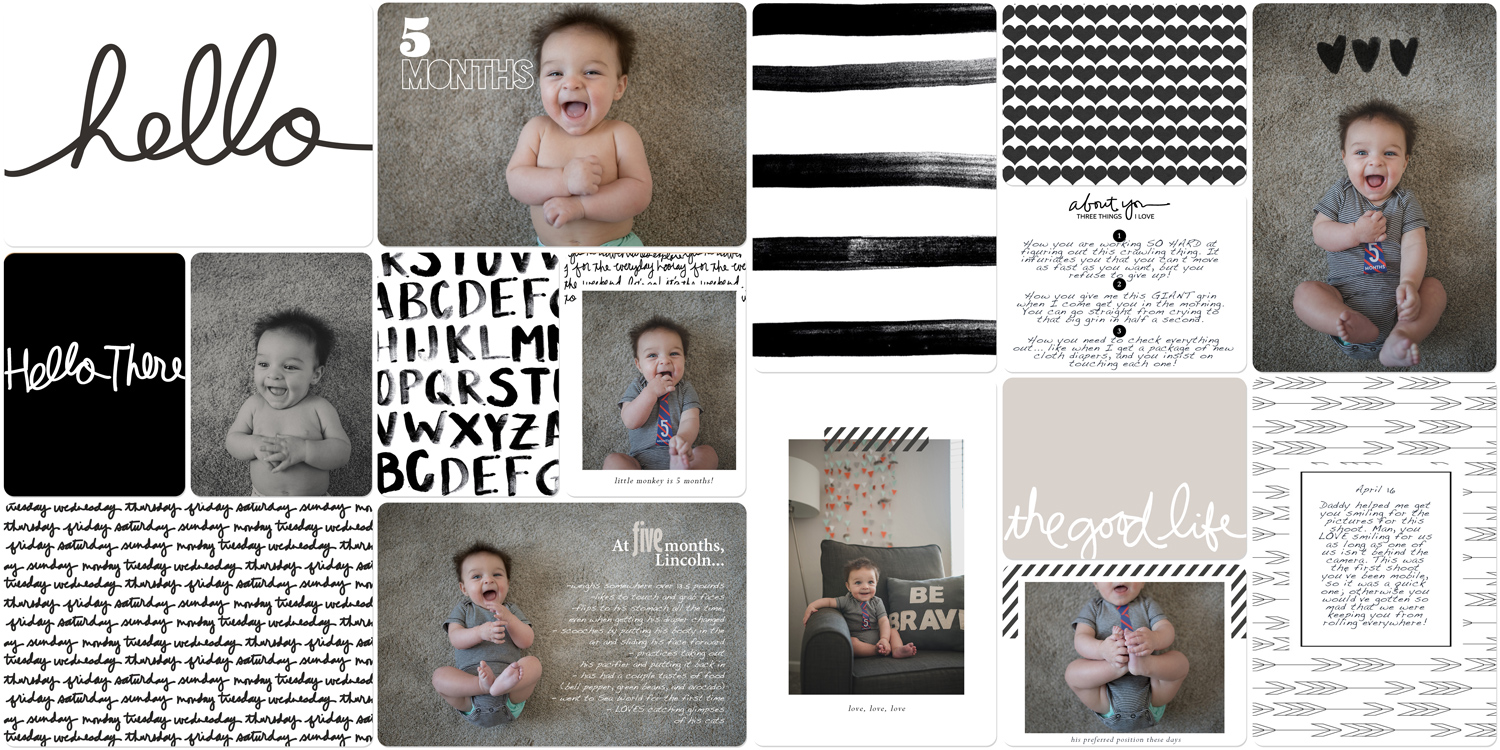 Because I am a huge fan of Liz Tamanaha’s products  (Paislee Press and my three favorite Project Life kits), I exclusively used her elements to give the pages a unified look. I also used the same several frames for any photos that weren’t full bleed, from Liz’s All the Stripes collection. 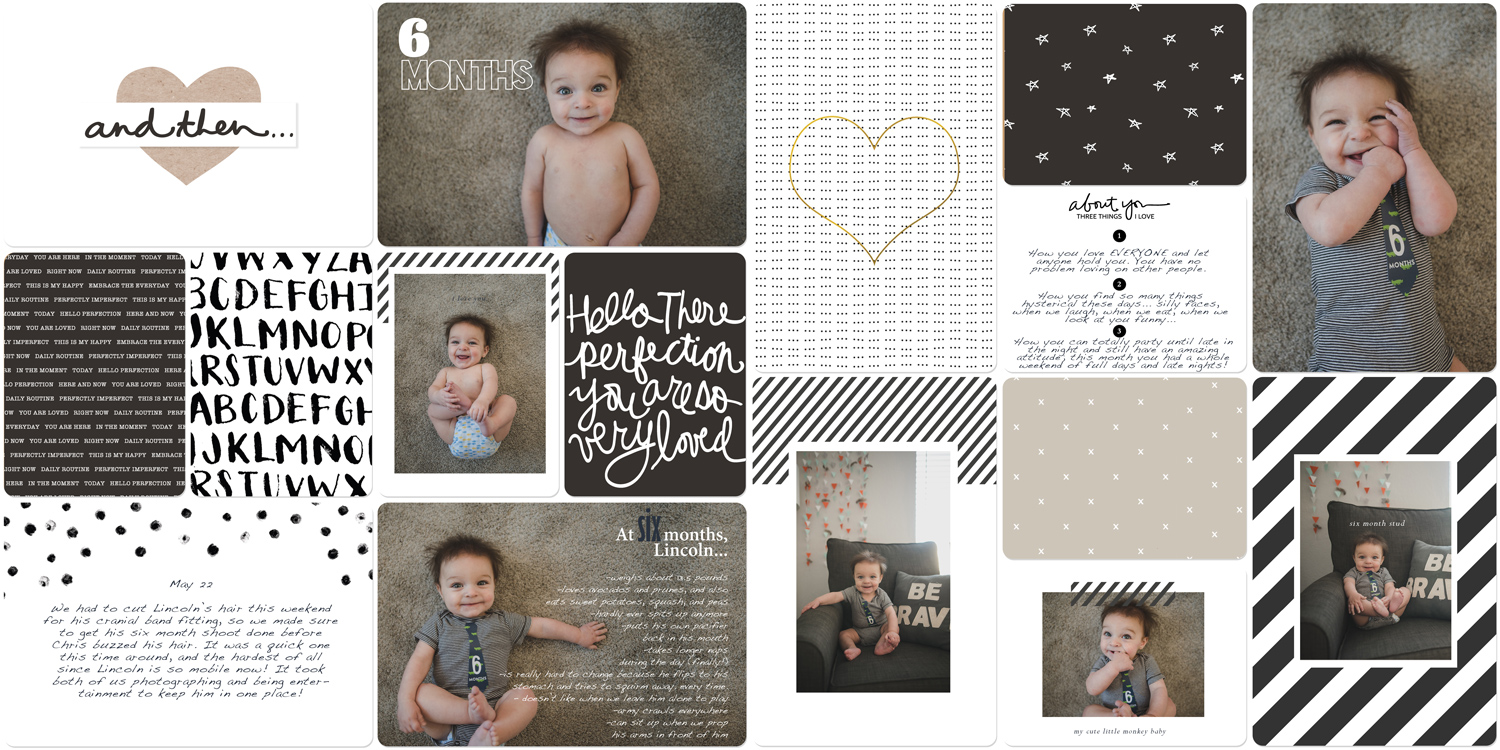 I wanted to make sure there was plenty of white space, which is why so many elements I used are white and black, but every once in awhile I threw in a burst of color, like in L’s seven month page below. I love that reddish/coral color for a pop. 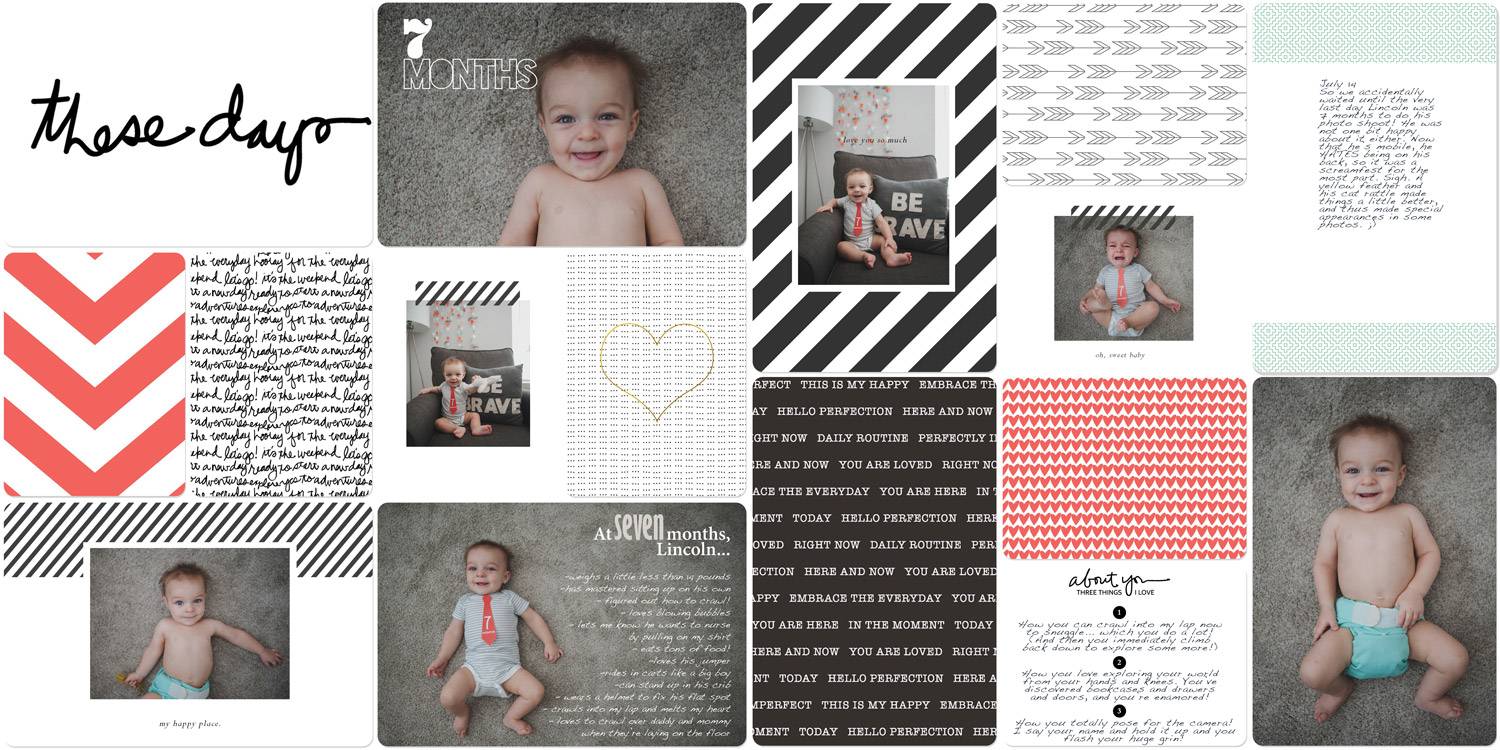 And mustard yellow. Such a great color. 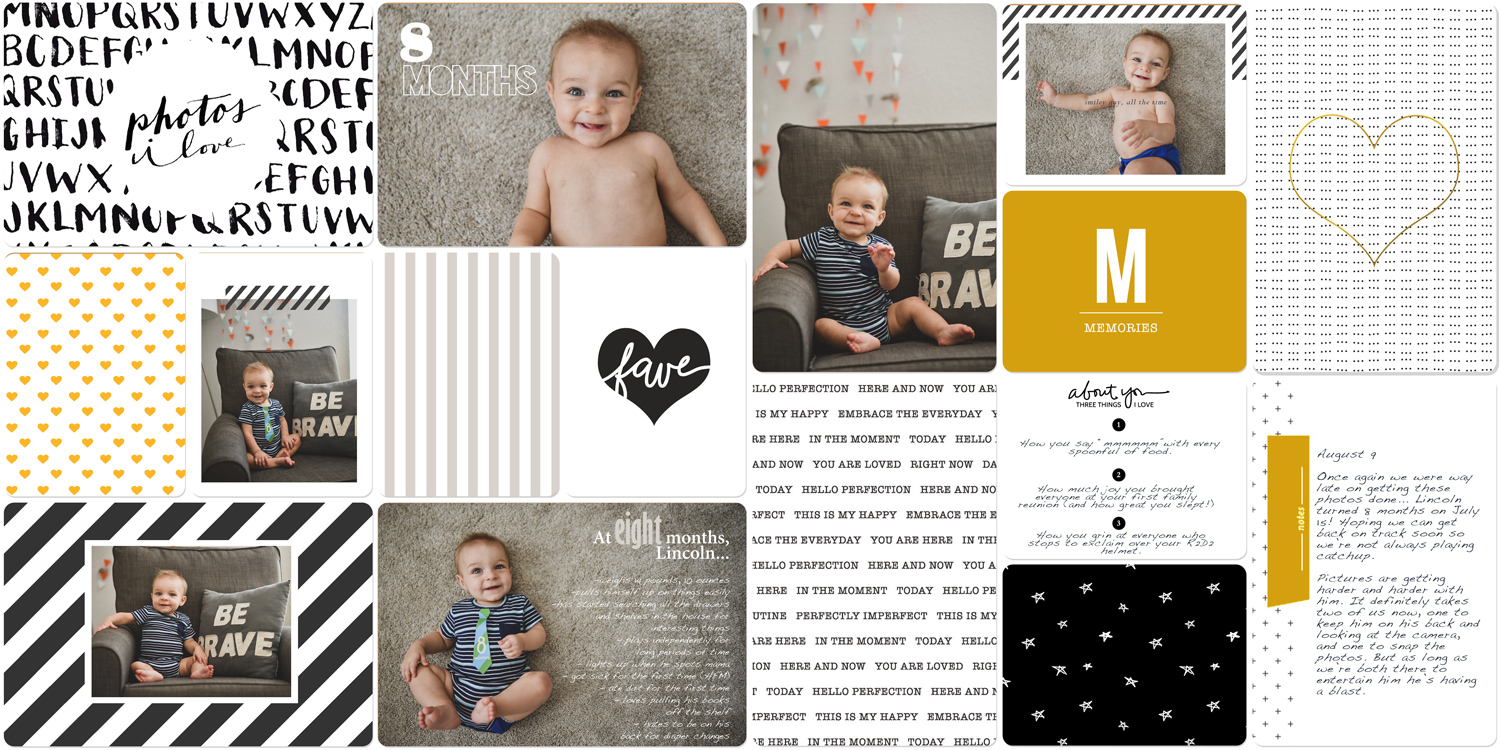 As Lincoln got more mobile, it got harder and harder to get those same exact shots each time. I definitely had to employ Chris’ help at around the six month mark. Chris was my baby wrangler, keeping Lincoln looking at the camera and rolling him back into position every time he flipped over. Seriously, for every one shot of Lincoln actually looking at the camera, there were about ten shots of Chris’ arms reaching to put him back into the frame. 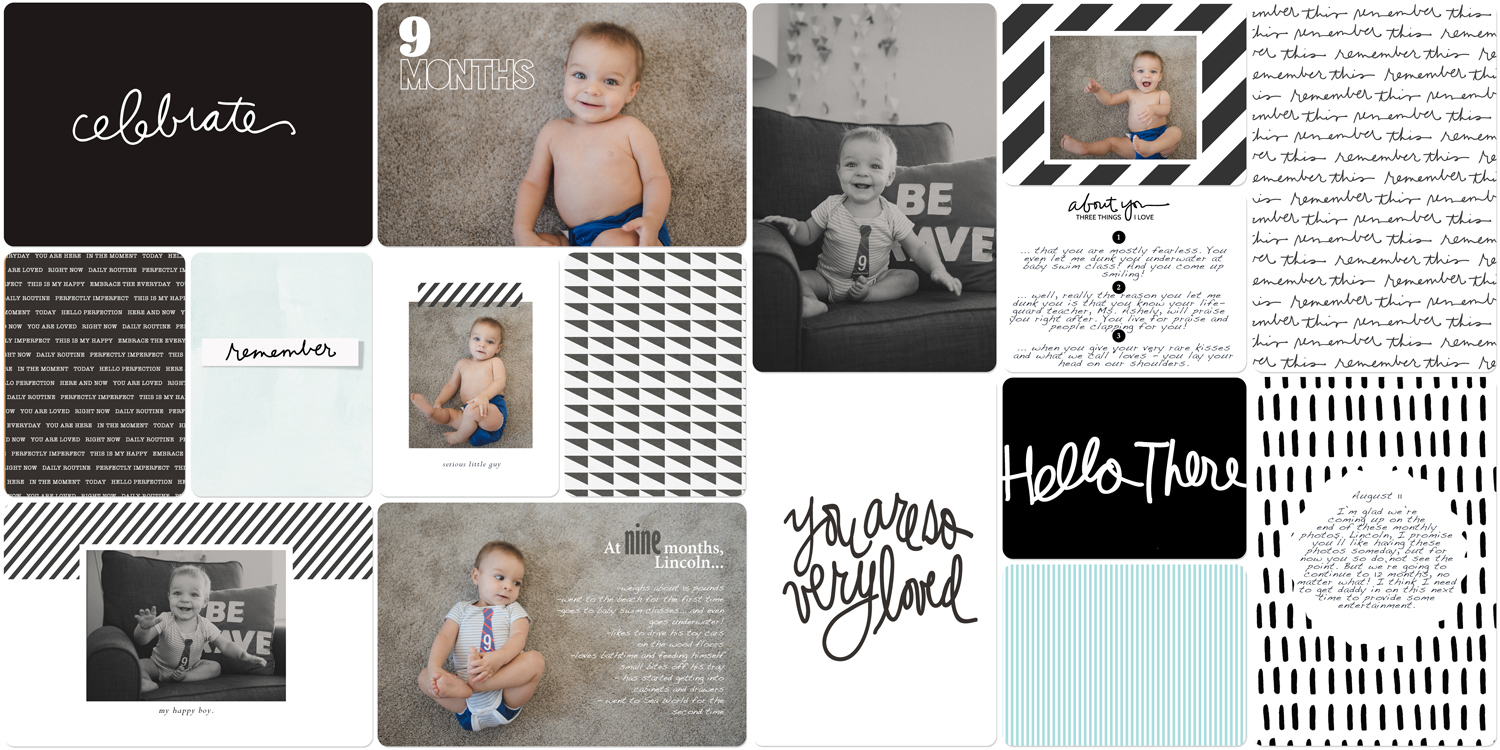 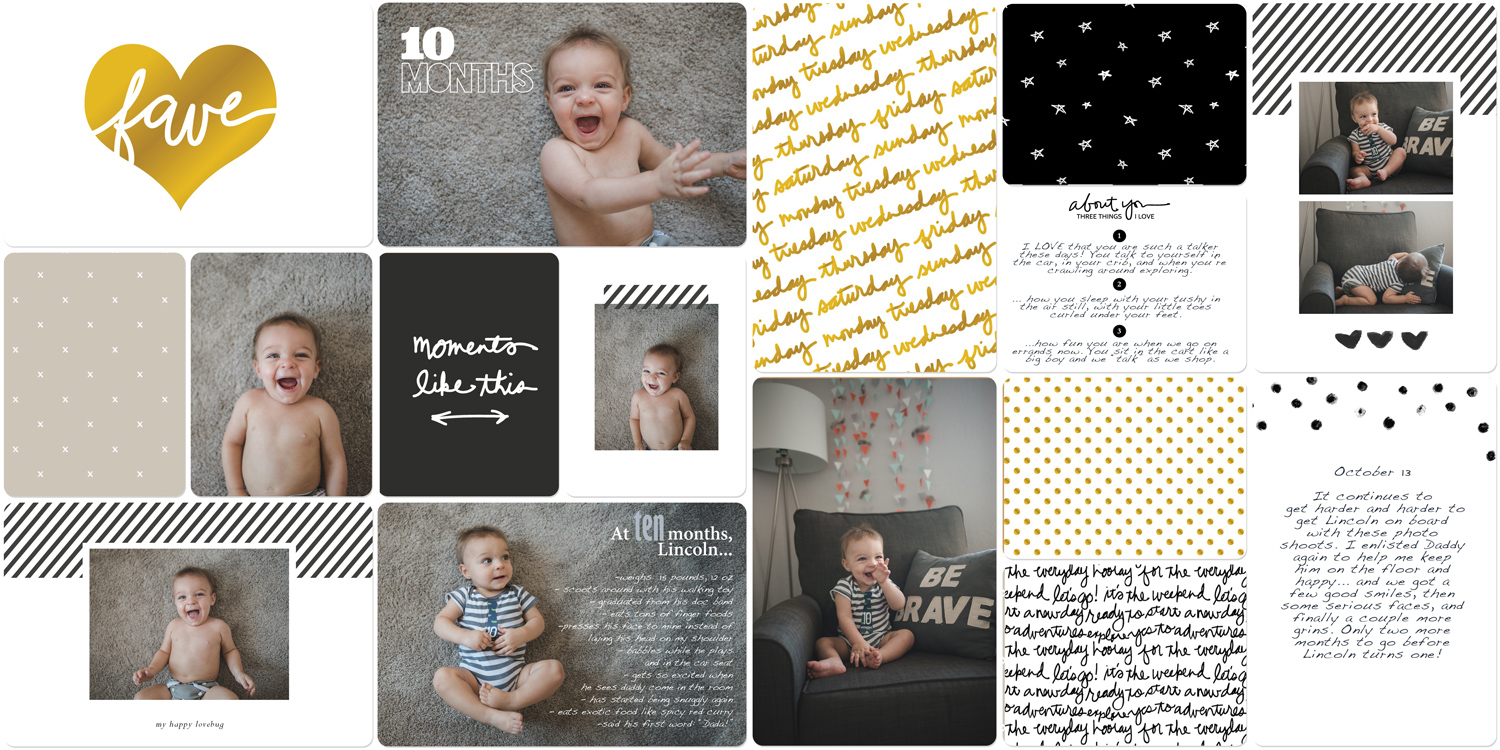 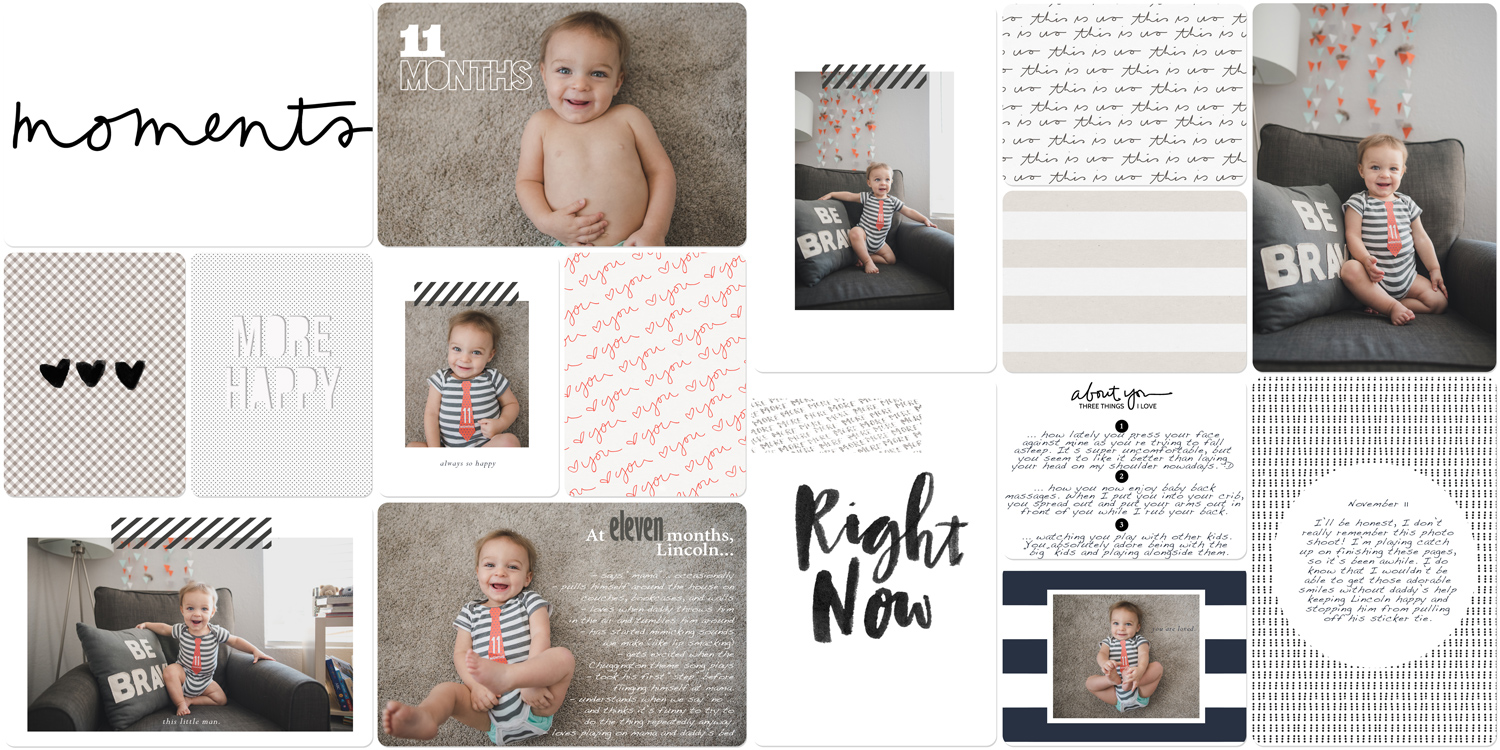 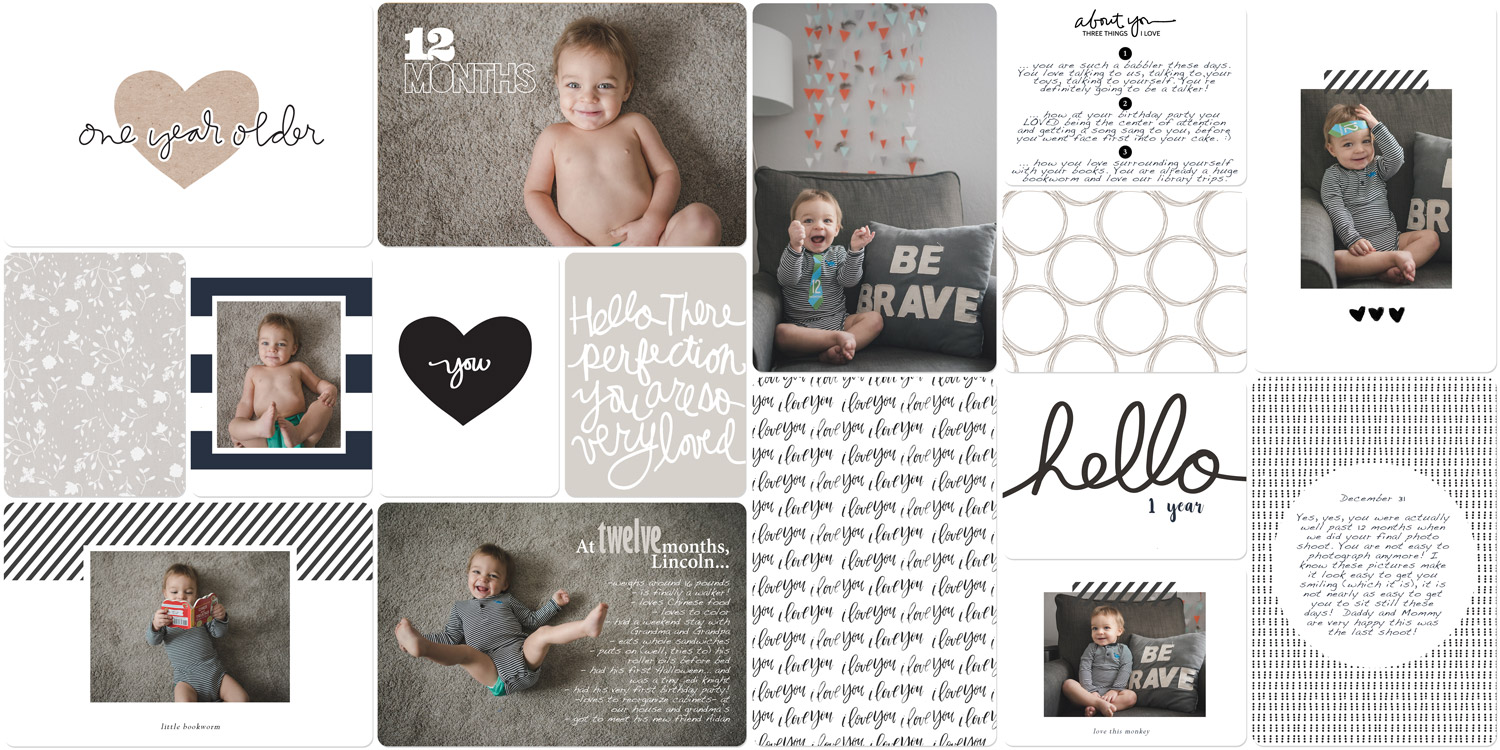 I really, really love how this turned out. And I love that Lincoln will be able to read through his book and know so much detail about his first year. Once I figure out which printing company to go with, I’m planning to order four copies of the book- one for us, one for him, and one for each of the grandparent sets. I’m so excited to see Lincoln flip through his book–he loves seeing pictures of himself as a baby. 🙂

Tips to Setting Up a Baby Scrapbook (And Actually Finishing It)

I didn’t actively do this in the beginning. Like I said before, I just modeled month two’s photos after month one’s and it worked. When Chris and I did the monthly photo shoots, we ensured we always had: a diaper only, waist up type picture with room at the top left to put the month number; a full body shot with L clothed and plenty of white space to add in his stats for the month, and a picture of him on his rocking chair with his Be Brave pillow, wearing his month number tie. All other photos featured on that month’s page were just the best photos taken while trying to achieve those three looks.

2. Keep certain elements in the same spot on each page.

The title card, month number photo, and stats photo always stayed on the first page, in the same positions from spread to spread. Everything else was negotiable as to placement.

Black, white, and that warm grayish brown were always my go-to colors. In fact, I barely used any other colors until month 7. Using the same colors creates a strong cohesive feeling.

4. Keep the elements consistent from page to page.

I used the same Project Life kits for all twelve months, which are the three kits designed by Liz Tamanaha. They are far and away my favorite kits to use for Project Life. Most of the cards are from the Moments Like These and Midnight collections. Everything else comes from Liz’s digital scrapbooking line Paislee Press. Since her stuff all has a similar feel, the pages really seem cohesive from one to the other. Along with keeping elements consistent, I kept the fonts the same as well. Design 101: Nothing ruins cohesiveness more than changing up fonts in the same document.

5. Write your notes down ASAP.

Sigh. So many things I wished I’d recorded. There were times when I was late putting a page together, three months had gone by, and I realized I had forgotten to jot anything down. Thank goodness for Instagram; I could at least scroll back through and see what new things Lincoln was getting into at that time. But the best, most detailed journaling always came in the months that I had purposely take time in the moment to write. I used my Notes app to quickly add events and new developments as I saw them. Well, most of the time.

6. Use a program that’s easily accessible and that you know well.

Chris and I have an Adobe subscription, so I have Photoshop downloaded on my computer and my laptop, meaning I can take this project on the road when we’re out of town. Having used it for years, I can pretty quickly put pages together now, but I know when I first started figuring out Photoshop years ago it was painstakingly slow putting a digital page together. Photoshop Elements is actually where I started out–it’s a much more simplified version of real Photoshop, and without the price tag of it’s older brother. Another possible program I thought about using was the Project Life app; you can do everything from your phone which is great when you’re out on the go and have a few minutes here and there. Just pick something that you can quickly use–frustrating programs make it so much harder to complete a year-long project like this.

This is seriously not going to go how you expect it. Just saying. 😉 Babies have no appreciation for how cute their baby book will end up if they would just. sit. and. smile. If you’re going to go all out with a full photo shoot for each month (like we did…) there’s only so much you can do to plan it to go smoothly. We wanted to do our shoots at the same time of the day each time, so the light coming in was consistent. Ha. Lincoln did not care one poopy diaper about the lighting. Sometimes we put it off and put it off… and he was almost the next month old before we finally got around to just getting the photos, perfection be darned. And like I said before, once he got mobile, these shoots became increasingly hard to pull off with the combo of shots we were trying to get.

Hwoo (that’s the sound of a big sigh, in case you were wondering)–it feels good to be done with this project! I’m excited to jump back into a weekly Project Life format this year and play around with a little LESS consistency from page to page. We’ve got big things happening this year with our little two-year-old tornado and I can’t wait to continue recording our story.

Note: This post contains affiliate links. What are affiliate links? Basically I link to something I’ve tried and loved, and if someone happens to click through the link and purchase it, I can earn a small commission. This does not affect the price for the purchaser.