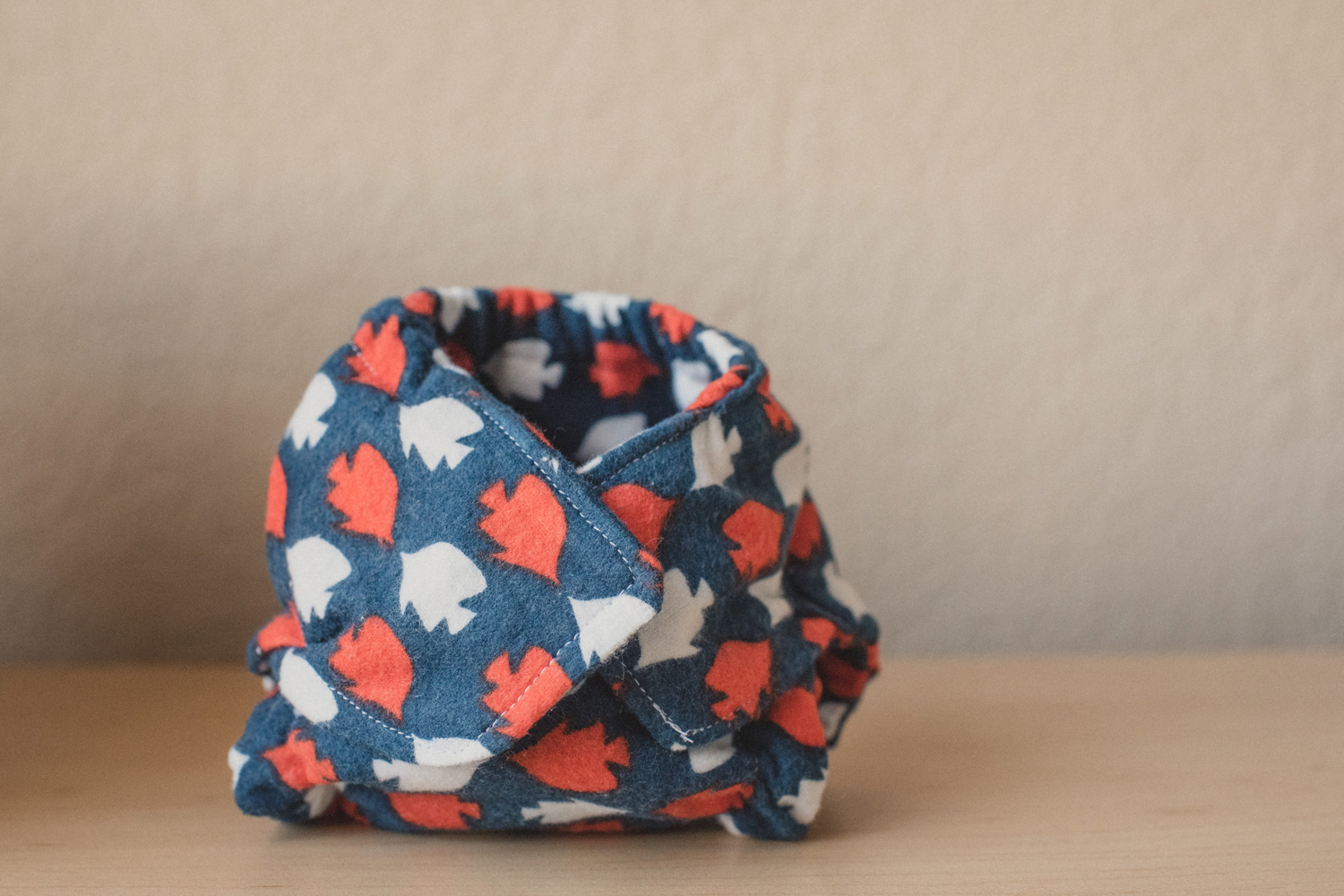 So why am I even bothering making cloth diapers, when there’s already so many adorable ones out there? When I first started researching (and being overwhelmed by) cloth diaper types, one thing that kept coming up over and over was that most newborns aren’t big enough for the one size fits all model. Most people just used disposables until their babies were fitting into the cloth brands, but then I came across DIY diaper tutorials. I figured why not make flannel fitteds that are newborn sized to use for those first couple months? Our plan is to use these flannels, as well as a stash of prefolds, with Thirsties wraps as the leak proof outer.

I read through quite a few tutorials before I found the one that made the most sense to me. Mary Ostyn at OwlHaven has an amazing method, AND she has specifications for different diaper sizes. I made a template for myself in Photoshop to make cutting the fabric easy peasy. After a few attempts and modifications, I had my system down. But I was still having trouble with the elastic. And then I stumbled on Ali’s tutorial at Dream Crafter, and boom. Elastic became my friend. (Finally.)

The best thing about making cloth diapers is that they are DIAPERS. So even though I’m not the best sewer, I can rock these. Because at the end of the day, it really doesn’t matter that my stitches aren’t perfect; these things are going to be used to wrap a baby’s booty. So much more fun to sew when perfection isn’t required.

So here’s my methodology (along with way too many pictures).

2) Use leftover fabric to make a stack of ovals to be the main absorbent part of the diaper. I get 5-6 stacked per diaper. 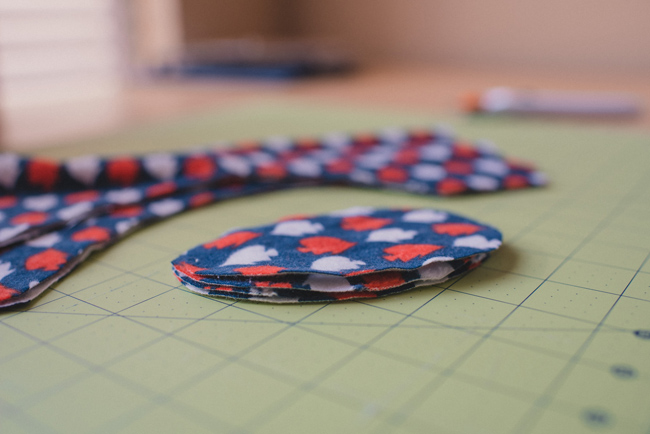 3) I run a line through the stack to hold the pieces together. 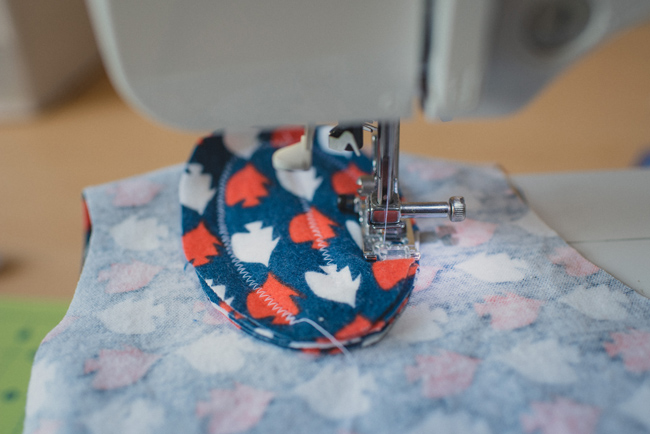 4) Then sew it down with a zig zag stitch to the wrong side of one of the pieces.

The part that you’ll see is the right side of the fabric, but it will be the inside of the diaper. Does it matter if the stitches are a perfect oval? Nope. Not one bit. 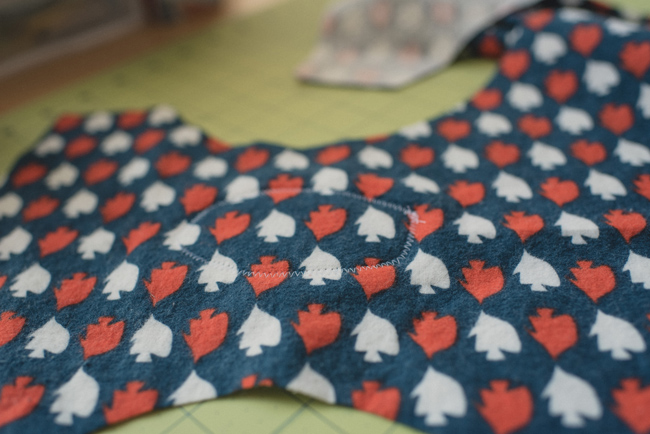 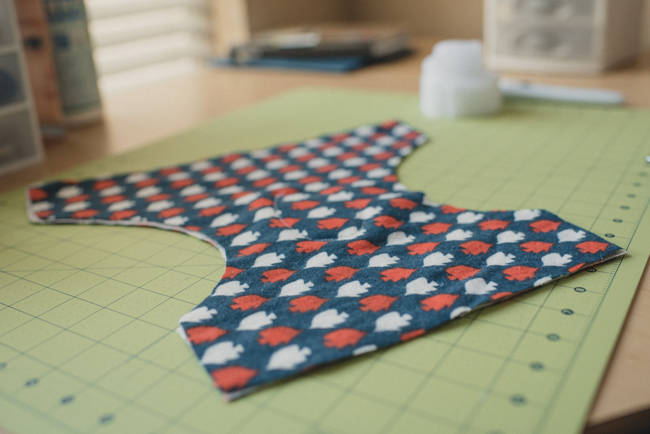 Okay, so this next part I sometimes do, but mostly don’t: adding velcro for easy attaching. I like the idea of easily fastening the diaper with velcro, but I’m mostly okay with using Snappis to hold the fabric in place on baby. After I did several velcroed diapers, I tried them on my friends’ newborn and they didn’t quite work so well. Granted, her baby was five weeks old, not brand new, and bit bigger than average, but I figure why do all the extra work each time for a chance that it’ll fit right. If I don’t do any attachments, I don’t have to worry about it fitting or not.
But. I still do it once in awhile. Just in case. 🙂
5) Cut a long strip of the soft side of the velcro. I put my diaper pieces together at this point and fold it up so I don’t accidentally sew it to the wrong spot. (I am 7 months pregnant at this point, and I do ridiculous things like that). The long strip gets sewn to the part of the diaper that will be the right underneath baby’s belly button.

Here’s another secret: I sew right on the front of the velcro. I know you’re supposed to sew from the back so it doesn’t look hideous, but it was really hard for me to keep my stitches straight on the velcro like that. I ended up falling off the side of the velcro way too much and having to go over it a few times, which ended up looking worse. So I decided whatever, and just sew right on top now. 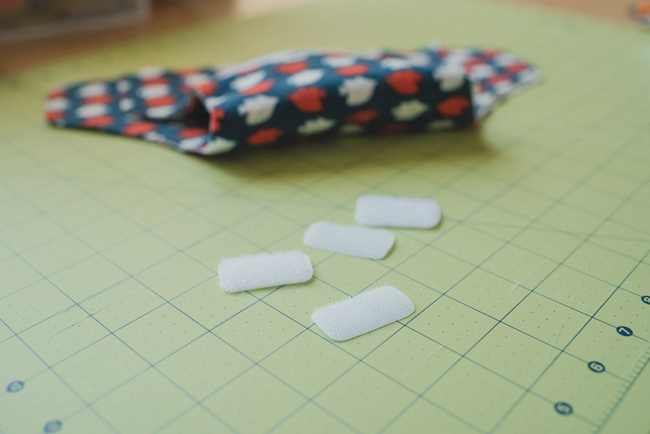 Again, I set up the diaper to make sure I place the velcro in the right spot. These four tabs go on the wings that wrap around baby. The outside two are the scratchy pieces that will attach to the long tab in the front. The inside two are the soft pieces that will be used as laundry tabs, or when the diaper’s not in use. The scratchy velcro side likes to stick to the flannel I’ve found.

7) Then I sew those suckers down.

If I decided not to do velcro, I skip steps 5-7 and go straight to sewing the pieces together.
8) I put the right sides together and pin all the way around.

And here’s where I differ from most of the blog tutorials I read. A lot of those tutorials were actually for pocket diapers, so a gap in the back was necessary. There are a couple reasons I chose not to bother with pockets, the main one being that I found it hard to sew in the elastic for the pocket. Another is that these diapers are meant for baby for when he’s really little, so I’m hoping I won’t need to add soakers to meet his little bladder’s needs. And if I do need some soakers, I’m okay with just laying them in the diaper.

9) Sewing the pieces together: I leave an opening in the front of the diaper (the smaller side) for turning purposes. I try to leave a pretty wide seam allowance around the curves and in the back so the elastic can easily be sewn in those spots.

10) Okay, elastic, which used to be the hardest part. I need three pieces: two 4.5 inches (the sides) and one five inch (the back). Instead of cutting each one out individually, I measure out the three sections on my one long piece of elastic, using a sharpie to mark the end of each piece.
First 4.5 inches: 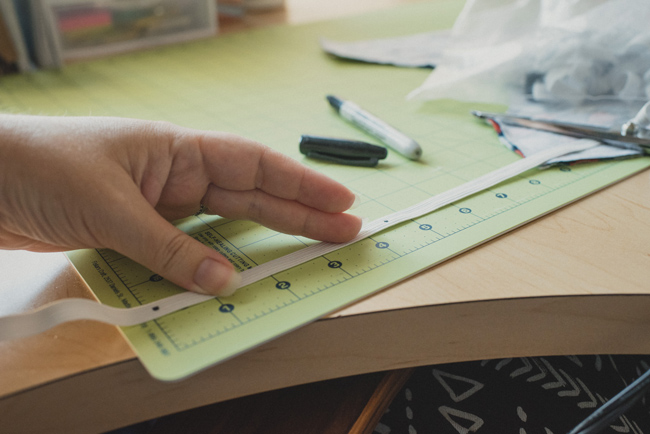 And lastly the 5 inch piece. 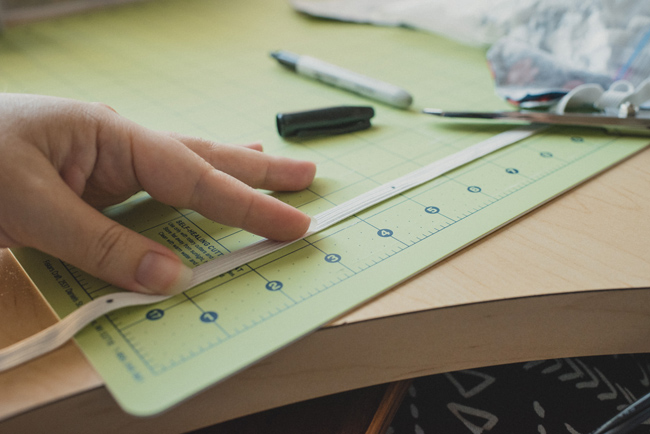 I like this method better because it’s much easier to pull the elastic taut as you sew when you have a good amount to pull on. When I cut out the pieces, it was harder to keep pulling the elastic the closer the needle got to the end of it.
11) I set my machine for tacking the elastic down on the end. What works for me is a stitch length of .7 and stitch width of 4. This gives a really tight, wide group of stitches that hold that end in place. 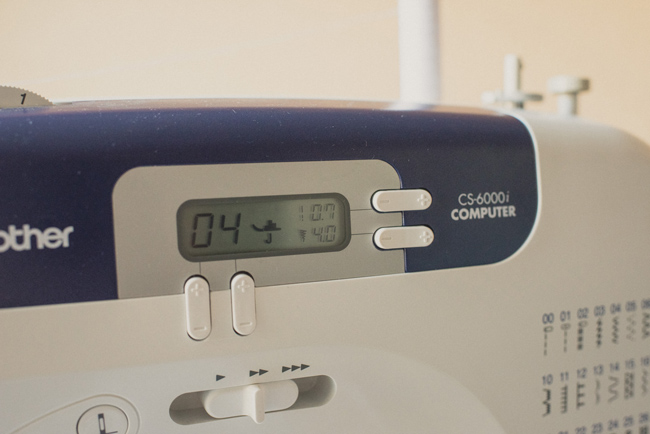 12) I start with one of the side elastics (the 4.5 inch elastic), and carefully hold the elastic in place in the seam allowance. Then stitch!

I probably go a little overboard with tacking. I’m sure just a few stitches are required in real life, but I’m a little paranoid.
13) Next, I change the settings to sew the whole piece of elastic down. It needs to be sewn with a zig zag that isn’t so tight it can’t move. I use a length of 2 and a width of 1.5. 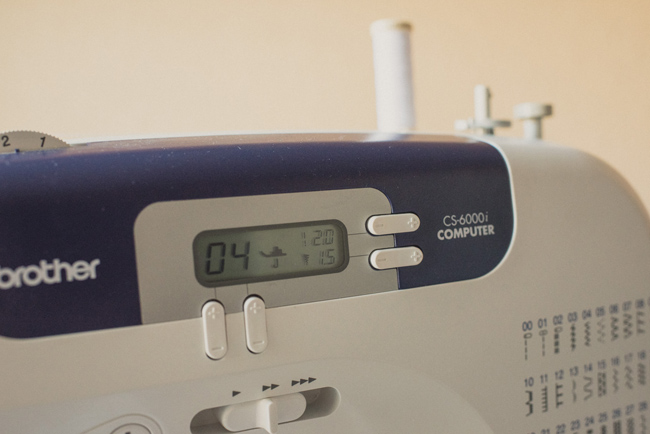 14) Stitch the elastic down while pulling it nice and taut. That part was impossible to to photograph while I was sewing, so this is the end result, where you can see the nice puckering. Since I’d already measured out the elastic, I know to stop when I hit the sharpie mark, and cut off the rest of the elastic there. 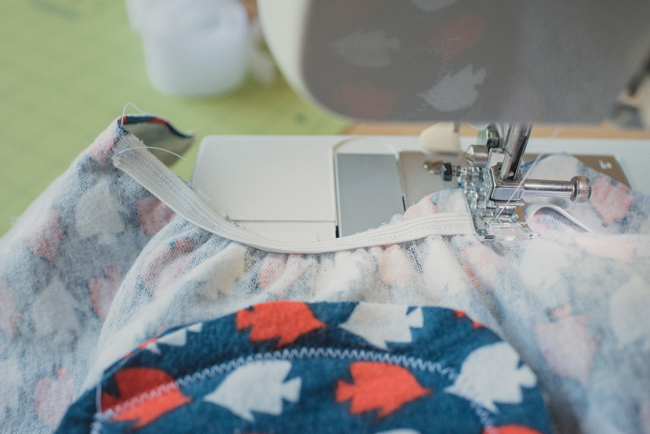 15) Then I switch back to the tacking settings on my machine and tack the heck out of the other side. 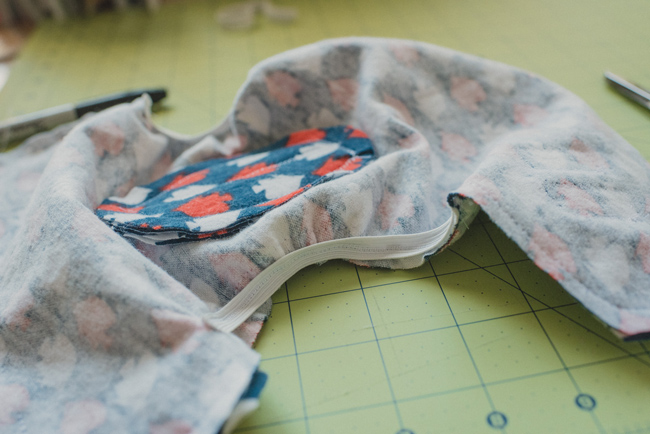 16) I do the other side’s elastic, and then the back elastic last.

18) I trim off any excess fabric around the corners and elastic if necessary, then turn the diaper inside out. I poke out all the corners with a pencil or whatever’s handy so they’re shaped better.

19) Top stitching. Sometimes I do it, sometimes I don’t. More often I will do it, because I like how it flattens out the wings better than leaving them as is. The only thing that’s really necessary is closing up the gap in the front. Sometimes I’m a little paranoid about hitting the elastic with the top stitch. Stitching over the elastic will kill it, so I often give it a very wide berth. 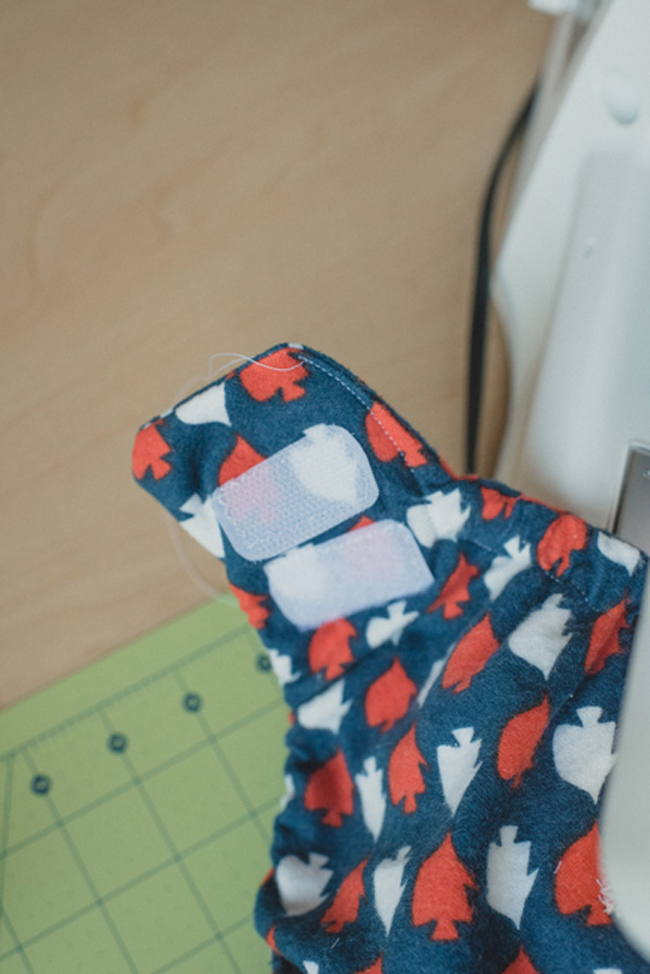 20) The final step is to close it up, admire it, and then take it to show Chris how adorable it is. Because seriously.

It’s the cutest, littlest thing ever. 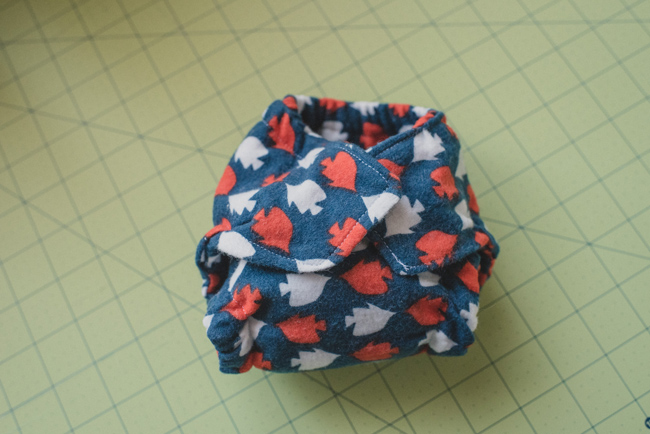 I have no idea how well they’ll work. Really no idea. I guess we’ll see in November! But I figure they won’t be completely useless, even if they don’t end up being as absorbent as I’d like. And if the fit’s a little off, that’s fine, since we’ll be using the Thirsties wraps over them.
I made some itty bitty matching liners with leftover flannel. I size them to be a little shorter than the length of the diaper, then cut out a bunch and zig zag stitch them together on the ends. They’re not perfect looking, but they fit inside the diapers and are cute to boot. 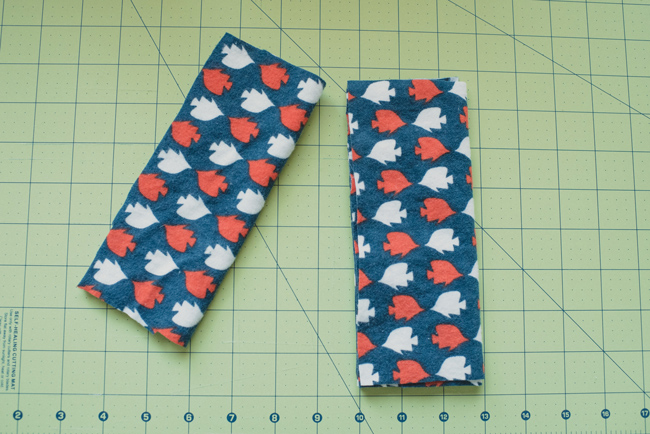 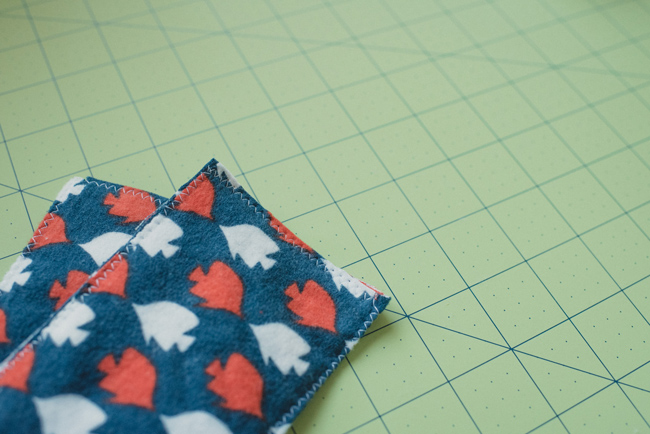 Here’s my stash so far. I’ve got about six other flannels in waiting, so I think by the end of this I’ll have about 20 fitteds saved up.

We also caved and got a few newborn sized BumGenius all-in-ones. We found a great deal on barely used ones on clothdiapertrader.com. But that’s it! Other than those six, it’s going to be these flannels and prefolds until he’s big enough to fit in the one size regular diapers. So excited to wrap his little bum in these!