No Whales in Royal Russia

This school year started with a bang and has just kept going! Every day I think, “I should blog that!” And then I spend my prep period actually prepping, get home, eat dinner, finish prepping for tomorrow, sometimes take a nap (8th graders are emotionally and physically draining), and then realize it’s like 10:22pm. When did that happen? And usually I think: “Well, it’s too late now. I have just enough time to start thinking about the day after next, and then I’m hitting the sack.”
Well tonight it is 10:22pm, and I will blog, darn it!
My 8th graders this year are super awesome. Super awesome. You wish you had my 8th graders, Algebra teachers. They are a fun, sweet, innocent, creative bunch who genuinely seem to want to learn this stuff called math.
The first week of school, we started talking about real numbers and their subcategories. I had them do a foldable in their interactive journals, and the next day I had them draw out the nesting boxes to show which numbers are part of which categories. Then I showed them the really easy way to categorize any number: figure out at which category the number first appears (i.e., negative numbers first appear in integers, 0 first appears in the whole numbers, etc.) and then go up. Everything above that category is what that number belongs to. They totally got that. In the weeks since, we’ve even started ‘visualizing’ the nested boxes. I can put my hand low on the white board at “natural numbers” and work my way up pointing out the invisible categories and the kids totally know where I am and what I’m talking about. 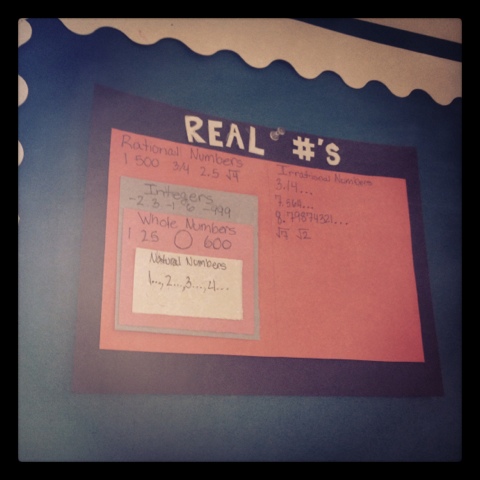 My third module decided they needed an acronym to remember the order of the rational side of numbers, and “No Whales In Royal Russia” was born. We’ve said it so many times over the last few weeks, that I feel like it’s a trick I grew up learning. On quizzes, I always see the phrase scrawled into corners of the paper. It’s caught on in my 5th module as well; one of the girls called it out today during our test review. (Already the end of unit 1, what?)
The above artwork was made by one of my 3rd module girls. She gave it to me the day after “No Whales in Royal Russia” was born. I seriously love that she took time the night before to cut all these out and make such an awesome representation of the nested boxes! And I was thrilled to have such an awesome piece of “math art” to put up before open house!
This school year is awesome so far!
craftyteachermama
0