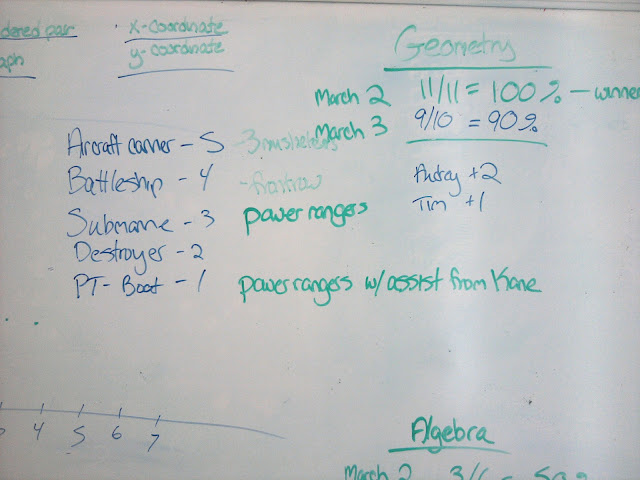 Life’s crazy right now. Either I’m at work or at home (or on alternating Thursdays sitting in a four hour seminar class), either grading, or teaching, or planning. These are my daily activities. When I get a chance to go off-book and check up on my google reader, or edit some photos, or update my own blog, I usually just want to go to sleep. Or stare mindlessly at anything.

It’s really hard to be productive with the stuff you want to do, when you’ve got so little free time to do it in.

I’m about a quarter of the way through student teaching. Looking forward to the break April will be, as a lot of my student days will be taken up with the standardized testing schedule. Good for me, because it means less teaching in April. Bad for me (and the kids), because we lose about 3 weeks of class time, and I really want to get my kids through these courses by the time my student teaching is up.

Currently, my geometry kids are doing coordinates, midpoints, measures, blah, blah, blah, and the algebra kids are learning how to solve equations (hopefully- tomorrow will tell if they actually learned what I taught them on Monday) and will soon move to ratios, proportions, and those darn awful airplanes flying west/canoes rowing upstream/ drivers going way too fast word problems. Seriously, Chapter two of Algebra 1 is the worst. It’s just all over the place with all these complicated topics. Can’t wait to get to a simple chapter like 5: Functions. Or even 3: Linear inequalities. At least there’s just one topic being covered.

I’ve been having a lot of fun with the Geometry kids lately. With the exception of about 3 of them, they all are really trying, come to class in a good mood, and are turning in homework consistently (finally!). Last week I made up a number line game to get them to practice adding positive and negative numbers (without realizing it, they probably did about 150 problems in 20 minutes– I’m sneaky that way). I thought they’d find it really cheesy, but holy cow they loved that game! So I revamped my next day’s lesson to include another game- Coordinate Battleship. Just like regular Battleship, but you use the coordinate graph, split the class into teams, and you get to hide the ships while they try to sink them. It was loud, but super fun, and I loved seeing the kids get a chance to interact with each other. And it was great fun hearing the team names they picked for themselves- especially the Power Rangers. Turns out we all watched Power Rangers when we were younger. Of course, I was the only one who’d watched the original series, but whatever. We bonded, people.

As it turned out, every team ended up sinking one of the ships. It was looking a little bleak for my back row team of K and J (of 106% fame) toward the end. K was really the only one playing, but J was being enthusiastic and paying attention so I let it go. Every time their turn came, K would lean back in his chair, scrutinize his paper, and say, “Well, you see, I’m going to have to say…” and then fill in the blank with whatever coordinate he chose. He never got a hit, but he always got close enough that another team was able to guess the right coordinate to hit and eventually sink a ship. Towards the end, every time he got a “miss” he’d (mostly) good-naturedly say, “I give up!” and be hit by a resounding chorus of “No! You can’t give up!” from the others. Seriously. Cute.

Finally it came down to the last ship, the two-coordinate Destroyer. K ended up getting the first hit, and the other teams swarmed in on the area. It was a guessing game after that, as to which way the ship was facing, and I inwardly prayed the other teams would all guess wrong. They did, and it was back to K. He was looking uncertainly at his paper, and I began to get afraid he hadn’t been marking down the coordinates the other team had guessed. But finally he looked up and said, “Well, you see, I’m going to have to say… 0, -12.” And when I replied with “Hit, sunk,” the whole class exploded.

It was awesome. Math games are so fun.

Unfortunately, they’re really hard to come up with, find online, or incorporate into the lesson. I mean, what kind of game am I going to come up with for the next chapter on angles?

At least Coordinate Battleship was amazing. Hopefully the memory will keep them floating through a few more chapters.